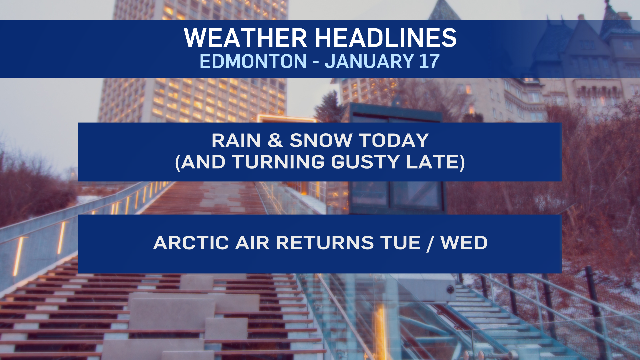 After an icy commute this morning, weather and driving conditions will get worse later today and the drive home could be extremely treacherous.

Authorities are advising against highway travel in much of central and north-central Alberta. Side streets, sidewalks and parking lots are coated in ice.

However, most of the main roads in Edmonton are just wet and slushy and should stay that way through the early afternoon hours.

BUT…the rain will change over to snow this afternoon and we’ll pick up a couple centimetres of heavy, wet snow in the Edmonton area by 9 or 10 p.m.

We’re also expecting gusts in the 50-60 km/h range this afternoon and tonight. So, blowing snow will significantly reduce visibility during the evening commute.

On top of that, temperatures will start dropping after about 4pm. So, the freeze-over on the main roads will begin.

The precipitation ends tonight and the gusty wind will taper off by early Tuesday morning. However, with temperatures around -20 C Tuesday morning, the morning drive Tuesday will be far from ideal as most (if not all) roads will be iced over.

It's going to be an UGLY couple of days on roads and sidewalks.

The worst of the storm hits the Edmonton area today, but the impact will be felt right into Tuesday as temperatures TANK and everything that's wet this afternoon becomes icy by late tonight/Tuesday morning.

A potent low pressure system is diving across the province and a nasty cold front will sweep through behind that system this afternoon/evening.

A winter storm warning is in effect.

We're getting rain and freezing rain this morning.

Remember: They're the same...the only difference is what happens when they hit the ground.

So, we can have both occurring at the same time in different areas/neighbourhoods.

Treat it all as if it's freezing on contact though.

The rain turns to snow at some point this afternoon and by late afternoon the wind starts to gust.

At the same time, temperatures start to tumble and the freeze-over begins/continues.

So, you're going to have wet/slushy roads turning icy and getting polished up by the gusty wind.

PLUS - blowing snow will be significantly reducing visibility.

If you can stay off highways today and early Tuesday, that's the safest bet. If you NEED to travel, check conditions before heading out and give yourself extra time.

By Tuesday morning, EVERYTHING is iced over and it'll be a slow commute in the morning.

We should be in the -20 C range Tuesday morning and we'll likely only get to the mid minus teens for daytime highs Tuesday/Wednesday.

BUT...we start to warm up Wednesday night and we're back around zero by Thursday afternoon.

Northwest and west Alberta have snowfall mornings. About 10-20 centimetres of snow will fall through the day with the heaviest amounts hitting areas between Grande Prairie and Whitecourt, as well as the mountain parks.

The winter storm warning (for a combo of snow and freezing rain) extends west to east across Alberta along and around Highway 16.

Wind warnings are in effect for Red Deer/Coronation areas and across the rest of southern Alberta.

Stay tuned for updates throughout the day.

Today - Cloudy with periods of rain, freezing rain and rain/snow mix this morning.

Snow developing this afternoon. 2 to 4 cm possible by late tonight.

Tuesday - Clearing early in the morning. Sunny with a few clouds in the afteroon.