Josh Classen's forecast: The arctic air settles in this week

Josh Classen's forecast: The arctic air settles in this week 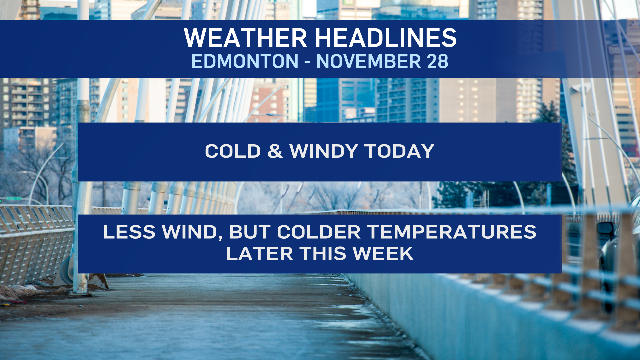 The heaviest snow missed the Edmonton region. But, we're not missing out on the cold and the wind.

AND...while the wind should ease up by Tuesday, the arctic air is sticking around all week.

In fact, it'll get even colder later in the week.

No heavy snow, but possibly a few flurries in the area today and/or this evening. Otherwise, just cloudy skies.

Further east, winter storm warnings are in effect for east-central Alberta (Lloydminster/Vermilion south to Hanna-Coronation). Snow and near zero visibility thanks to gusty wind have prompted that warning.

Back in Edmonton, we'll get daytime highs near -15 C Tuesday/Wednesday with a few flurries possible tomorrow. Wednesday's risk of snow has the potential to give us 2 to 5 cm accumulation.

Morning lows are expected to be near -20 C Wednesday and Thursday.

BUT...with some clearing Thursday afternoon, we could drop into the mid -20s (some models even projecting -30'ish) Friday morning and Saturday morning.

Daytime HIGHS will be in the -20 C range Thursday/Friday.

There's some uncertainty as we head into the weekend. I'm keeping the Edmonton region in the -15 C to -20 C range for daytime highs. But, there's a chance we break out of the arctic air over the weekend.

I'm thinking the cold will stick around at least through to early next week and possibly break towards the middle of next week. However, as I said - there's a good deal of uncertainty beyond Thursday/Friday.

So...we'll see how the week plays out and keep you updated.

One thing's for certain - It's getting COLD and we won't be back to near 0 C temperatures any time soon.

Thursday - Clearing in the afternoon.