Josh Classen's forecast: The cold is here...and it's staying

Josh Classen's forecast: The cold is here...and it's staying 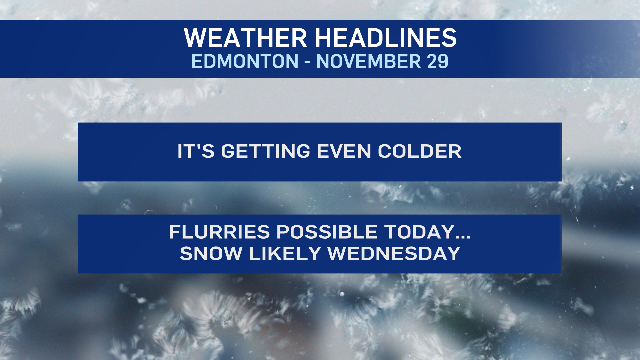 It'll get even colder later this week and there's not much sign of a return to average (highs in the -2 C to -4 C range) over the next five to 10 days.

Get used to the cold and prepare for a bit more snow, too.

We'll stay mostly cloudy through today in Edmonton and most of central and northern Alberta. We won't see any heavy snow. But, some occasional flurries are possible.

The next system we're watching sweeps in from the west on Wednesday and brings a couple centimetres of snow to most areas of north-central, central and southern Alberta.

Most areas should get 2 to 5 cm of snow, including Edmonton and area. But, there may be a few pockets of 5-10 cm, particularly closer to the Red Deer area.

Areas just north of Highway 16 will also pick up a bit of accumulation. However, in general, we'll see lesser amounts the further north you are.

Whitecourt, Grande Prairie and Slave Lake regions will probably get 1 to 4 cm.

Bonnyville and area probably gets 2 to 4 cm while very little accumulation is anticipated in Fort McMurray.

Wind should be fairly light in Edmonton and surrounding regions, so blowing snow won't be much of an issue. But, reduced visibility in eastern Alberta late Wednesday could be a problem thanks to some gusty wind.

Edmonton will likely start to see some light snow Wednesday morning. But, most of the accumulation should fall in the afternoon hours. So, the evening commute will probably be more impacted than the morning commute.

Wind speeds near 20 km/h early today will taper off to around 10 km/h midday and should be relatively light tonight and Wednesday.

Wind chills in the -23 C range this morning will become wind chills near -20 C this afternoon and although there won't be much wind, wind chills will still be in the -20 C range through the day Wednesday.

Temperatures will hold steady around -20 C Thursday. We'll drop into the -25 C to -30 C range Friday morning and probably won't get above -20 C in the afternoon.

Similar morning temperatures are expected Saturday, but we ARE expecting a bit of a "warm up" back to the mid minus teens Saturday afternoon (that's still cold, just not AS cold as Thursday and Friday nights).

Sunday-Tuesday should also have afternoon temperatures in the mid minus teens.

Looking LONG Range, we're probably back closer to highs near -10 C (maybe even some single-digit highs) by the middle to end of next week.

Thursday - Clearing in the afternoon.

Friday - Sunny with a few clouds.

Sunday - Mix of sun & cloud. Temperature steady through the day.