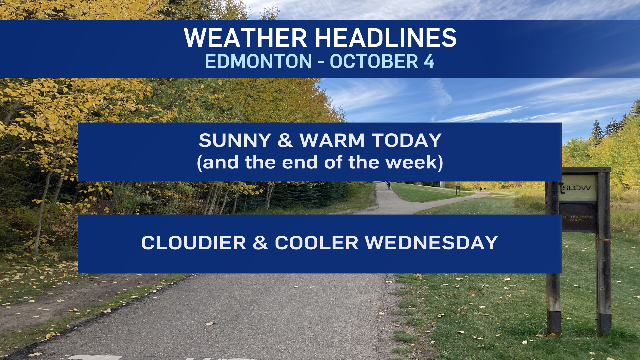 Above-average temperatures and sunshine will dominate the forecast for the rest of the week in Edmonton and area.

BUT...that won't be the case tomorrow.

Wednesday's our outlier with a high near 14 C, mostly cloudy skies and a chance of a scattered showers.

Outside of Wednesday, daytime highs will be near 20 C right through to early next week.

It's shaping up to be one of the warmest first weeks of October (2020 was close, but nothing else in the past 10 years really comes even close to this sustained warmth).

We'll see some increasing cloud overnight and clouds with just a few sunny breaks through the day Wednesday.

There's some colder air dropping into northern Saskatchewan/Manitoba over Wednesday and Thursday, and those areas are in for a significant cooldown.

But, warm air tries to hold on over Alberta.

The dividing line between those two airmasses will likely stretch from the Peace Country southeast through Edmonton and down towards Coronation.

Along that front, we'll get some gusty wind and scattered showers.

It definitely doesn't look like it'll be a day of heavy, steady rain for the Edmonton area.

But...we'll be breezy, cloudy and at least parts of the area should get a shower.

The warm air wins out and pushes further east on Thursday to bring temperatures back close to 20 C for Edmonton.

As for morning lows, the average for early October in Edmonton is 3 C.

Instead, we'll be in the 5 to 8 C range for the rest of this week and into the weekend.

Outlying areas may see some patchy frost Wednesday morning. But, most of the region should remain frost-free for a while longer.