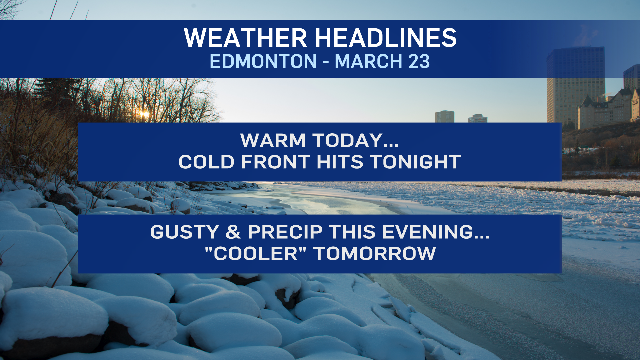 The warming trend should peak with highs in the low to mid teens in Edmonton this afternoon.

Sunny with a few clouds and light wind for most of the day.

BUT...there's a low-pressure system set to move across northern Alberta later today and we'll have a cold front behind that system kicking up the wind and setting off some precipitation.

Northwestern Alberta gets into the act this afternoon.

The Edmonton area gets hit with the front somewhere between 8 p.m. and 11 p.m.

Wind will turn gusty and we'll get some showers turning over to wet snow.

For most areas, we're not expecting much accumulation. However, the foothills and mountains could see some heavier snow.

AND...there will be a few spots in central and north-central Alberta that get a bit of accumulation.

Behind the front (and with the Upper Ridge collapsing today), we'll get a high near 7 C in Edmonton Thursday.

That cooling trend continues into the weekend with highs in the 0 C to 5 C range. At this point, it looks like Saturday's the coolest day.

We also have more snow possible, although amount and timing remains a bit uncertain.

I think it's PROBABLY no more than just some light accumulation (less than 5 cm).

As of right now, it looks like the next wave of flurries or light snow moves in late Sunday and sticks around into Monday.

Friday - Partly cloudy. 60% chance of snow in the evening and overnight.

Saturday - 60% chance of snow in the morning. Mostly cloudy in the afternoon.

Sunday - Partly cloudy. 60% chance of flurries late in the day.

How to find cheaper flights this year as airfares soar

For those who remain undeterred by the daunting lines and flight delays at Canadian airports, questions remain about how to save money on air travel amid mounting fuel costs and inflation.