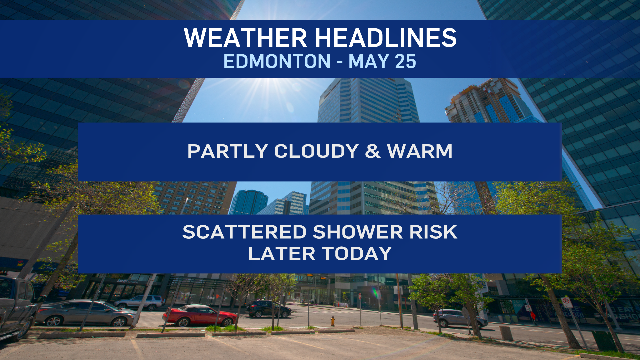 Should be another (mostly) beautiful day in Edmonton and surrounding areas.

Temperatures will be near 15 C at noon and we'll hit a high around 20 C late this afternoon.

Morning sun will give way to some clouds as the day wears on and there's a risk of some more precipitation in the area later today.

Tuesday's shower didn't really amount to much (except just south of the city where it came down a bit harder as some thunderstorms rolled through).

Today's setup will be similar with some scattered showers and a few thunderstorms coming off the foothills and tracking east late in the day.

Across the northern half of Alberta, we'll have showers and some thunderstorms developing this afternoon and it looks like that'll be the more active part of the province today and tomorrow.

That's not to say that everyone north of Edmonton gets a soaker. These will be showers, not steady and long-lasting rain.

In the city and surrounding regions, IF we get a scattered shower (slight risk of a thunderstorm) the most likely timeframe is late afternoon and/or early this evening.

Thursday will likely be our warmest day of the week with a high of 21 or 22 C.

Sun in the morning, partly cloudy in the afternoon. There's a slight risk of a shower near the Edmonton region.

But...I've left that out of the forecast for now since it's such a low possiblity.

The Friday/Saturday outlook has changed a bit.

It WAS looking like an area of heavy, steady rain would settle over central and north-central Alberta late Friday and through the day Saturday.

That still appears likely and many areas WILL get a good soaker.

But, for Edmonton and areas just south of the city...we may be in a situation where some rain moves through late Friday, sits north of us early Saturday and then sweeps through late Saturday.

THAT SAID - this many days out - trying to get "too cute" with the timing of rainfall in a system like this is never a good idea.

So...here's the takeaway: Good chance of showers or periods of rain starting late Friday and through the day Saturday BUT...it may not be discontinuous...there may be some breaks in the rain over that timeframe.

By Sunday, there may be a bit of lingering precip near or south of Edmonton in the morning.

Skies should be clearing by the afternoon.

Today - Partly cloudy. 40% chance of a shower this afternoon.

Slight risk of a thunderstorm in the area.

Tonight - 30% chance of a shower this evening. Clearing overnight.

Thursday - Sunny in the morning. Partly cloudy in the afternoon.

Friday - Increasing cloud. 60% chance of showers or rain developing late in the day.

Saturday - Mostly cloudy. 60% chance of showers or periods of rain.