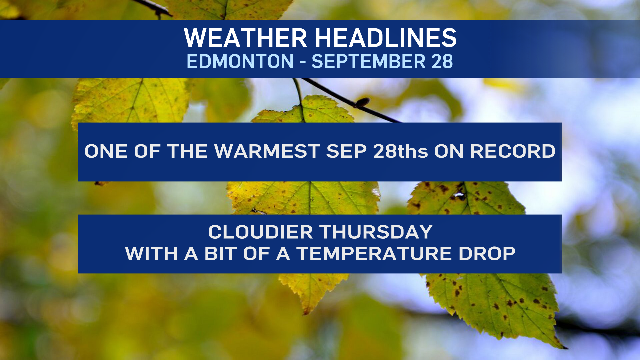 Edmonton and areas to the east and south will have their warmest day of the week.

For the city, we're expecting a high in the 28 C range.

Even in the northwest corner of Alberta , you'll still be well above average and into the mid 20s. But, it'll be a degree or two cooler than yesterday in most spots.

It looks like the second and third-warmest temperatures on Sept. 28 are:

So...today could end up being the second-warmest Sept. 28 on record in the city.

The upper ridge fades a bit and allows some cloud cover to spill across the province tonight and Thursday.

AND...we'll have daytime highs a good five to eight degrees cooler on Thursday (compared to today).

That'll still leave Edmonton in the low 20s for an afternoon high and about five or six degrees above average.

The ridge does look like it'll strengthen again through the weekend.

So, don't expect Thursday's temperatures to be the start of a cooling trend.

A former employee of Quebec's power utility who is charged with spying on behalf of China was granted bail Monday while he awaits trial.

After a surge of RSV cases among children overwhelmed hospitals across Canada in recent weeks, one infectious disease specialist explains how the respiratory virus can affect vulnerable adults.

The white gunman who massacred 10 Black shoppers and workers at a Buffalo supermarket pleaded guilty Monday to murder and hate-motivated terrorism charges, guarantying he will spend the rest of his life in prison.

Wouldn't it be nice to never have to work again? While this may sound like a dream to many, it is entirely possible. CTVNews.ca personal finance contributor Christopher Liew shares a handful of helpful tips on how to potentially achieve financial independence.

An Iranian general on Monday acknowledged that more than 300 people have been killed in the unrest surrounding nationwide protests, giving the first official word on casualties in two months.

Why organ donations are declining and how governments are reacting

Ontario and Nunavut opted into new legislation by the federal government hoping to increase organ donations as hundreds of patients die while on the waitlist each year.