Windy in Edmonton, but we'll dodge the heavier snow 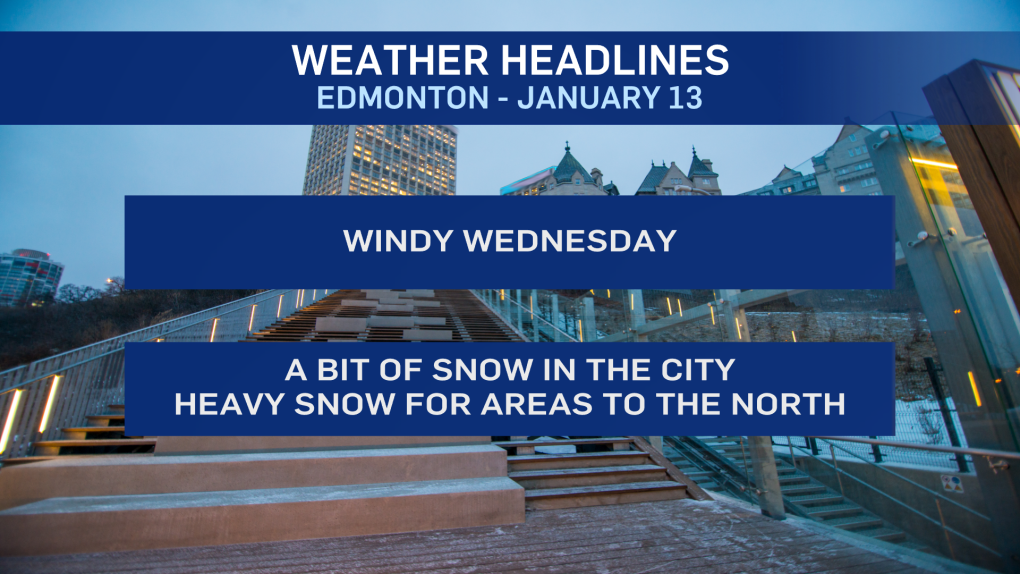 EDMONTON -- As of early this morning, it's looking like we'll be at the low end of precipitation expectations in Edmonton.

Areas just south and east (Leduc/Camrose and the Sherwood Park/Vegreville) have been added to the wind warning with gusts possibly hitting 70-80 km/h this afternoon.

There's been a bit of freezing rain in & around the city.  But, it doesn't look like it was very widespread or significant in most areas.

The threat for significant (possibly up to 5 mm ) freezing rain still exists east and north of Edmonton through the morning.

But...by 8 am, the risk for freezing rain should mostly be over for much of the city.

This has not played out as expected.  There was no immediate flipover from freezing rain to snow in Edmonton early this morning.

However, we have had (and will continue to see) heavier snow hitting areas west and north of Edmonton.

The snow will push east and we'll get some snow late this morning/early this afternoon.

That'll quickly move out by late this afternoon and the most likely accumulation range now appears to be 1-3 cm.

Snowfall warnings for areas to the west and NW of Edmonton are still in effect (as of this morning) with 10-20 cm anticipated.

Winter storm warnings for areas from Westlock-Barrhead east to Bonnyville remain in place with freezing rain AND 10-20 cm of snow AND gusts in the 60-70 km/h range midday and this afternoon.

Edmonton and area gets gusts in the 50-60 km/h range this afternoon and early this evening.

Most of the province gets a calmer and sunnier day Thursday.

Temperatures will continue to be above average right through into early next week.

But, watch for a big turnaround by the end of next week with some cold air moving in.

Daytime highs will likely drop to double digits on the minus side by the weekend of Jan 23/24.