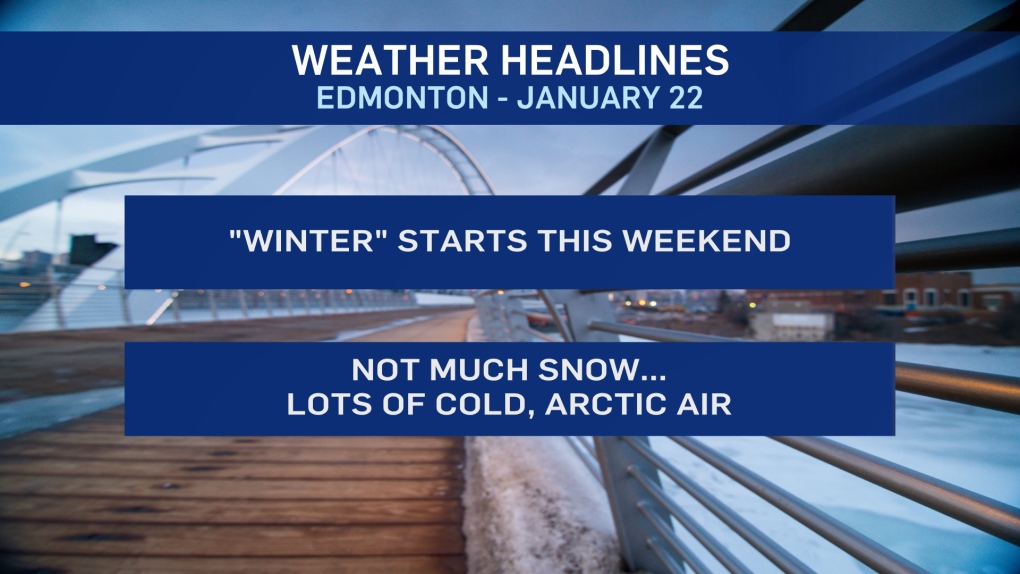 EDMONTON -- It hasn't felt much like winter this year.

In the 52 days since December 1st, Edmonton has been above zero on 34 of them.  Just 18 have had a high below zero.

On average, we'd have about 13 days with highs below -10 by this point in January.

But, it's all about to change.

Temperatures will still be near average today with a high of -3 or -4 in Edmonton.

We'll be cloudy this morning and then a bit of sun (and a 10-20 km/h breeze) for this afternoon.

Arctic air plunges south tonight and over the weekend.

The coldest air will be in northern and eastern Alberta (and SK/MB).

Nowhere in Alberta will be miss out on the cooldown.  But, as it often the case, western and southern AB won't be AS cold.

Edmonton looks to be more IN than out when it comes to the arctic airmass.

We'll likely have morning lows in the -20 range and daytime highs in the -15 range starting this weekend and carrying through most (probably all) of next week.

It still doesn't look like there's much more than some occasional light flurries over the next few days.

So, if you were hoping the colder air would come bundled with a significant snowfall, it looks like you're outta luck.

LONG Range - We're seeing hints in that we could break out of the coldest air by Jan 31/Feb 1.

I'm not completely convinced of that just yet.  But, it certainly looks likely that we'll be back to the -5 range or warmer by the 3rd-5th of February.

Again, that's all a long ways off and is subject to change.  BUT...that's the most likely scenario right now.