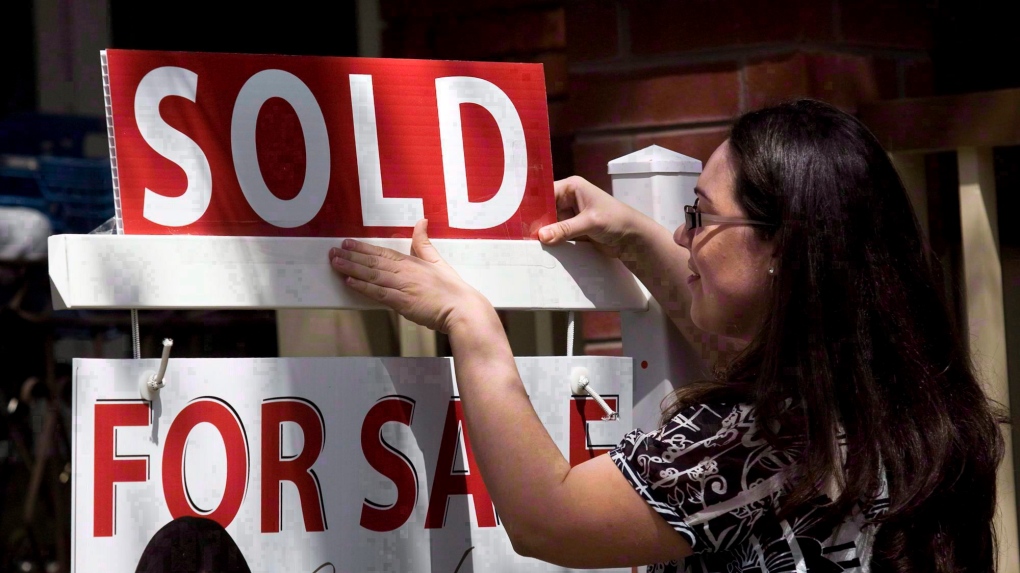 A woman places a 'sold' sign in front of a home in this file photo. (Darren Calabrese / The Canadian Press)

The survey, released Thursday, predicts the aggregate price of an Edmonton home will fall one percentage point to $371,000 in the year’s final months, compared to the fourth quarter of 2019.

According to the real estate company, the aggregate price of Edmonton homes stayed "relatively flat" over the past year, seeing just a 0.6 per cent decrease to $371,902, despite the pandemic and subsequent decline in sales.

One of the fastest selling types of homes is under half-a-million dollars in family-oriented communities, the survey suggested.

“Growing inventory of resale and new build condos has resulted in softened prices and excellent selection. Buyers are finding exactly what they are looking for,” wrote Royal LePage Noralta owner and broker Tom Shearer.

Calgary home prices remained even flatter, decreasing altogether just 0.2 per cent in the second quarter of 2020. Condos, in that city, however, also saw a steeper drop of 9.7 per cent.

In fact, Royal LePage inventory levels across Canada, which were already "constrained pre-pandemic, have failed to keep pace."

Royal LePage president and CEO Phil Soper noted, “Home prices shot up in the second quarter as a crush of buyers entered the market, attracted by extremely low interest rates and the perception of bargains to-be-had. … The surge in the number of first-time buyers was felt acutely, as these housing consumers soaked up supply without contributing to it.”

Nationally, Royal LePage measure between 3.9 and 8 per cent increases in two-storey, bugalo and condo homes.

However, the survey noted the recovery faced by many domestic and international markets creates some.

"The negative impact on home prices should be muted by the balanced nature of Canadian housing, as chronic housing supply shortages offset dampened medium-term demand."