A small group of protesters gathered downtown outside a children's storytime event featuring a drag queen hosted by the Edmonton Public Library (EPL), although organizers said it didn't take away from the spirit of inclusion and family entertainment.

Drag queen Felicia Bonée read children's stories to families at Stanley A. Milner Library and then led them in a dance party to Katy Perry's Roar and a sing-a-long including "Old McDonald Had a Farm" and "The Wheels on the Bus Go Round and Round."

The few protesters against the EPL hosting the children's storytime event stood outside the library around 11 a.m. holding signs and temporarily moved into the building as the event began, briefly shouting, "Let kids be kids."

Some of the protesters held signs saying, "Freedom," and "Shame on the library." One protester, Hilary Fortune, equated the event to "grooming" and "sexualizing" children.

A larger group of counter-protesters outside the library draped themselves in Pride flags, danced, and blasted children's music from the Lion King and other pop songs while holding signs saying, "Hate speech is not welcome here," "YEG hate free!" and "Being gay is like glitter, it never goes away." 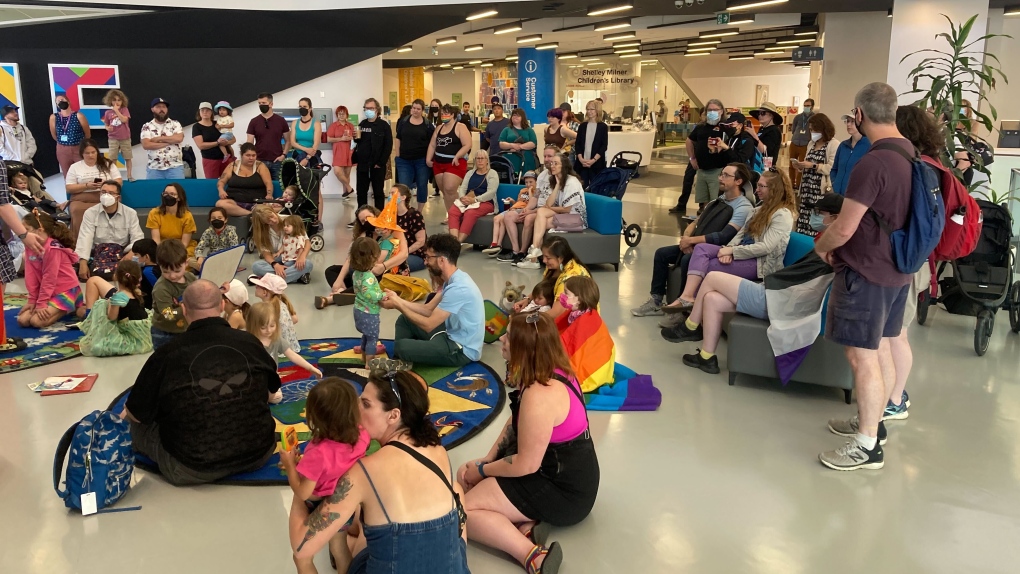 'REFLECT THE DIVERSITY OF OUR COMMUNITY'

In 2015, the nonprofit Drag Queen Story Hour, started in San Francisco to help entertain children and their families while appealing to their imaginations. Chapters have since spread across North America.

In the United States, anti-LGBTQ+ rhetoric has shifted to target drag storytimes, with interruptions and protests reported across the country throughout last Pride Month. Two months ago, a Montreal-area library was challenged for hosting a similar storytime event with a drag queen.

Elaine Jones, EPL manager for youth services, told CTV News Edmonton that the library is committed to hosting events celebrating diversity and inclusion, and the Over The Rainbow Story Time series of readings by drag queens are an example of that.

"We always strive to reflect the diversity of our community, and families have indicated that they would like to see more diverse programming," Jones said. "We take the safety of children very, very seriously at the library.

"We vet our programs very carefully," she added. "We vet our performers the same way for these programs as we do for any, so we are very comfortable with what we are doing."

Jones says EPL designed the program to be a family-friendly event that shares age-appropriate books celebrating diversity and different expressions of identity.

"You can tell the kids are having a great time," Jones said. "They really appreciate seeing somebody who is dressed up; to them, it could be a costume or an expression of identity. They interpret it the way they want to interpret it."

"If they can explore something in a safe space with their family with them," she added, "that's all you can ask of them."

'JUST A FAMILY STORYTIME FOR KIDS'

Outside the library, Megan Wilson stood with a group of counter-protesters and welcomed that EPL was hosting a reading session with a drag queen.

"It's just a family storytime for kids," Wilson said.

"Inclusivity matters," she added, "to make sure there is equality for everyone." 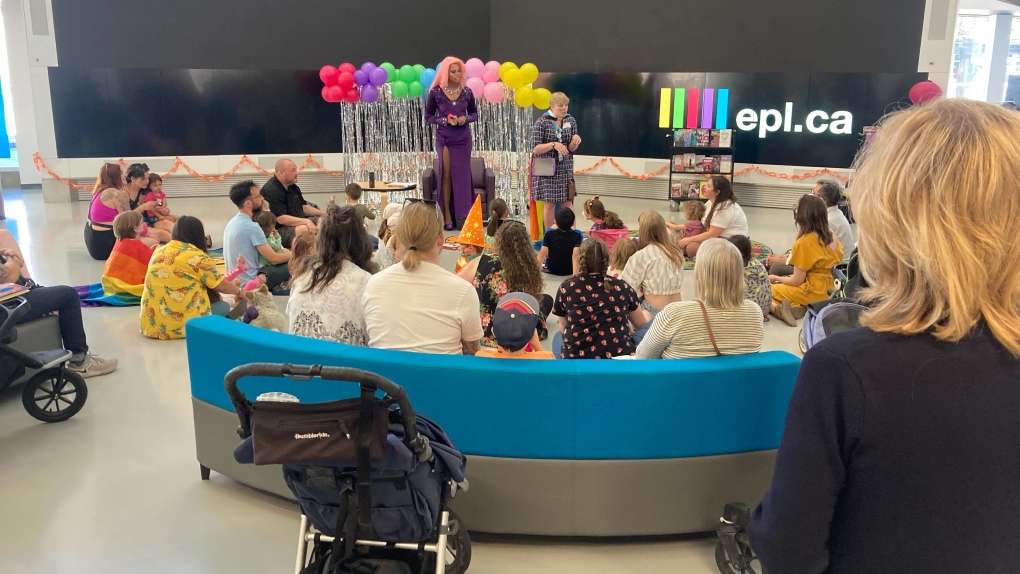 When asked about the protesters against the event, Wilson said they must not understand "drag in general."

"They can't equate the difference of clothing and sexuality, which are obviously not linked if you have a good sense of self."

Erynn Christie told CTV News Edmonton she was happy to attend as a counter-protester and that she was disappointed that messages promoting hate are still being spread.

"I don't know why we are still fighting this," Christie said. "We are not going to stand for hate on the queer community anymore."

Edmonton Police Service said its members noted "a small amount of interaction between the groups and some other patrons that briefly entered the library but it was resolved with ease and considered a non-issue."