EDMONTON -- An Edmonton man said he was struck in the face by a flying chunk of metal that smashed through his windshield on the Anthony Henday Tuesday, shattering his right cheek bone and eye socket.

“It sounded like a gun shot. And then all I could think about was Oh my God, I have to get this vehicle pulled over,” said Cody Horvath, who was driving at the time.

“The doctor who admitted me said ‘Boy, you’re lucky to be alive. This could’ve decapitated you or killed you.” 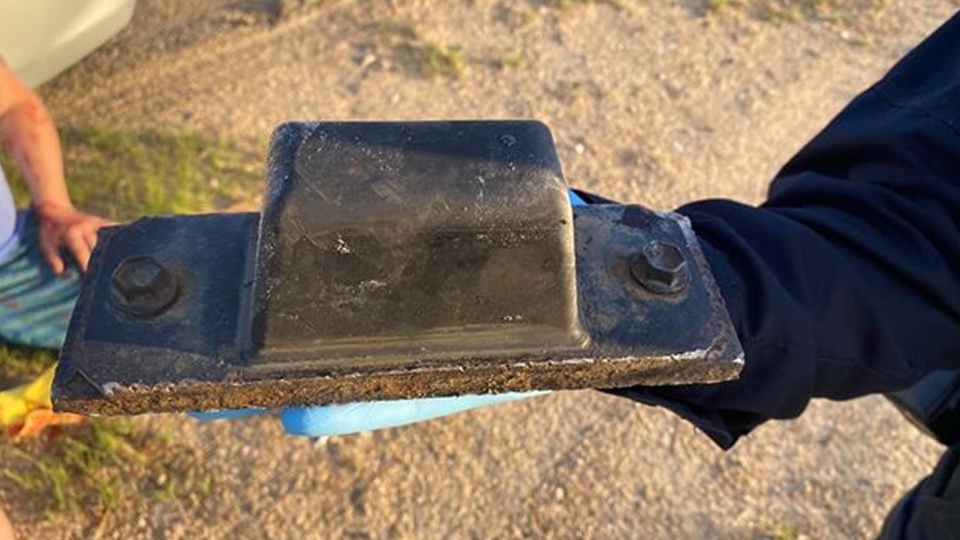 Horvath is a mechanic. From what he can tell, the piece of metal is either a bumper stop from a commercial vehicle or an axel stop from a light truck or Jeep.

Neither he nor his wife saw the metal fall off a vehicle or sitting on the road, so they’re not sure exactly where it came from. But on her trips to visit her husband in hospital, Jaimee Horvath has noticed there’s a lot of debris on the Anthony Henday and she questions whether the highway is being cleared frequently enough.

“And not just little debris. Not just garbage,” Jaimee said. “The chunks of wood, the metal, it’s incredible.”

“It’s crazy you don’t realize it until something like this happens to someone and you’re instantly seeing things in the ditch everywhere.” Horvath said.

The couple has written their MLA and Mayor Iveson to express their concerns but also want to remind drivers to take ownership of their vehicles and not to overlook a problem, should their vehicle have one. As a mechanic, Horvath said he often sees drivers delay getting it fixed.

“You get your license, you get your insurance, you’re really signing a paperwork saying that you are responsible for your vehicle, the shape that it’s kept in, and things like that and I don’t think people take it serious.” Horvath said.

Horvath is scheduled to have reconstructive surgery on his face Tuesday.

CTV News Edmonton reached out to both the provincial government, which provided a response Monday.

"What happened to Mr. Horvath is truly unfortunate. We encourage drivers to take close care of their vehicles and to make sure any problems with their vehicles are fixed as soon as possible," Alberta Transportation said.

"The highway maintenance contractor is required to remove debris from the roadway that has the potential to cause a hazard within 30 minutes of becoming aware of it. The contractor is notified of debris on the road through inspections conducted multiple times daily on the Anthony Henday."

It said between Jan. 1 and May 31 this year, 114,339 commercial vehicle inspections had been performed. In the same time frame last year, 126,102 were completed. Alberta Transportation said it expects the number of inspections to rise in June.