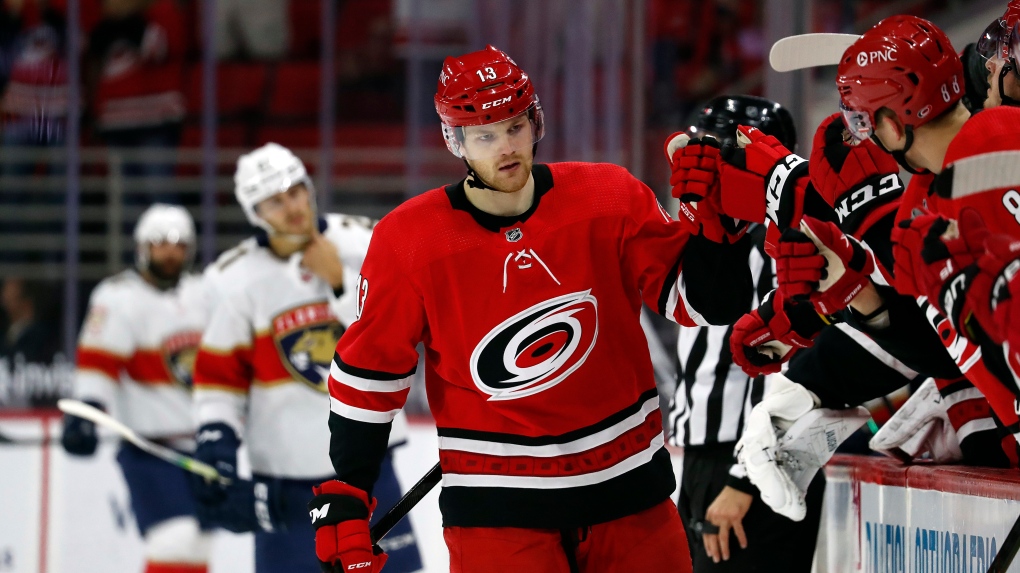 Carolina Hurricanes' Warren Foegele (13) celebrates his goal along the bench during the third period of an NHL hockey game against the Florida Panthers in Raleigh, N.C., Sunday, March 7, 2021. (AP Photo/Karl B DeBlaker)
EDMONTON -

Warren Foegele has signed onto a three-year contract with the Edmonton Oilers for $2.75 million annually.

The six-foot-two, 198-pound forward snatched up from Carolina Hurricanes on Wednesday in exchange for Ethan Bear.

Foegele has a plus/minus rating of -1, notching 20 points (10G, 10A) last year with an average of just over 14 minutes of ice time per game.

In the past three years Foegele has also hit double-digit goal totals.

This report by The Canadian Press was first published July 31, 2021.

Long-term care outbreaks are rising, and provinces have different strategies for keeping COVID-19 out

As the fourth wave continues across Canada and community spread climbs, outbreaks are also on the rise inside Canada’s long-term care homes, leading experts to stress the importance of staff being vaccinated — an issue which varies province to province.

A source close to the family of Brian Laundrie says Gabby Petito's fiance, who is now the subject of a federal warrant, left his parents' Florida home last Tuesday without his cell phone and wallet.

Ont. mother who camped outside premier's office will have son's autism file looked at:, minister