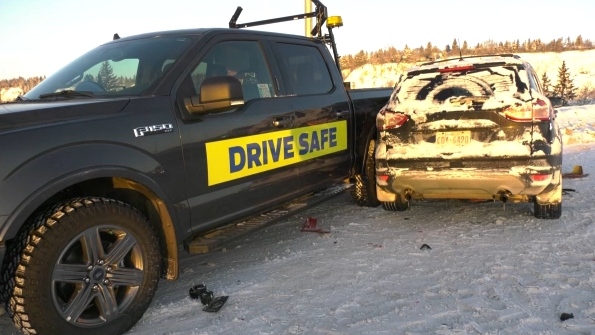 A photo radar truck was smashed in a collision in Edmonton on Dec. 29, 2021. (Matt Marshall/CTV News Edmonton)

Edmonton officials are now reviewing a photo radar location, after one of their trucks was crunched during a collision in southwest Edmonton on Wednesday morning.

Police said an SUV driver was headed east on Whitemud Drive's Quesnell Bridge when the vehicle slid on the icy road and hit the pickup, which was parked on the side of the road.

The collision happened just before 9 a.m. and an officer at the scene told CTV News Edmonton that it was caused by poor road conditions.

"This hill, this curve, can be pretty dangerous if you’re on slippery roads. So you’ve gotta slow down and take it easy and drive for the road conditions," Cst. Jennifer Quinn said.

No charges were laid and no tickets were written. No one was injured.

"We have suspended the automated enforcement site until an assessment is complete," said Rajna Tufegdzic with the City of Edmonton.

"The operator of the speed enforcement vehicle is contracted by The City of Edmonton. All deployment requirements were in place, including cones, hazard lights, and the vehicle was parked in accordance with all site requirements."

The Quesnell Bridge was listed as an approved Automated Traffic Enforcement Zone on the City of Edmonton website.