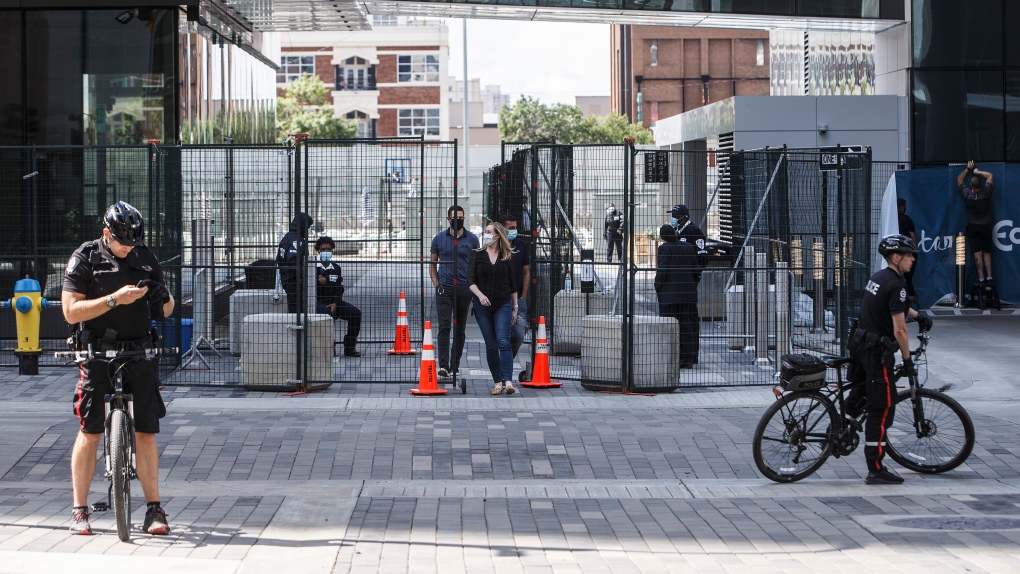 Fencing goes up around the Ice District to create a safe bubble for players, during the upcoming return of NHL hockey in Edmonton, on Thursday, July 23, 2020. THE CANADIAN PRESS/Jason Franson

EDMONTON -- As the first exhibition games of the renewed NHL season hit the ice Tuesday night, Edmonton police officers are gearing up for extra patrols around Rogers Place.

Edmonton Police Service said it is providing an additional six officers and one sergeant for Rogers Place policing, the costs of which will be covered by the NHL.

"Further, these are not police officers being taken away from their regular EPS duties," the service told CTV News Edmonton. "These are police officers who are on days off, vacation, etc."

EPS said as the playoffs go on, there will likely be less of a need for extra duty officers to patrol the perimeter of the so-called "bubble zone" around Rogers Place, because there will be fewer teams left.

The bulk of the officers will be deployed at 101 Street and 103 Avenue, and they will also occasionally be called on to handle traffic-related issues.

Exhibition games of the COVID-19-abbreviated NHL season begin Tuesday night, including the Oilers playing the Calgary Flames at Rogers Place, which is serving as the hub for Western Conference teams.

A best-of-five qualifying round will begin Saturday along with a seeding tournament for each conference's top four teams.

The games will distinctly lack in-game crowd noise because fans aren't allowed to attend due to COVID-19 health measures. However, video game company EA Sports will provide artificial crowd noise inside both Scotiabank Arena in Toronto and Rogers Place.