EDMONTON -- The presence of tiki torches at recent rallies in Alberta's two major cities has been widely publicized. While many see them as a clear symbol of hate, Edmonton's police chief says the mere act of holding one doesn't constitute a crime.

"We don't have that evidence," EPS Chief Dale McFee told reporters Tuesday. "Just because somebody says it's a racist rally or they're using something, you still have to have intent under the criminal code."

It's been just over a week since protesters marched onto Alberta's legislature grounds in Edmonton to rally against everything from COVID-19 restrictions and the imprisonment of a local church pastor, to mask laws, to racism. Just as they did this past weekend in Calgary, some protesters carried tiki torches.

McFee said, based on interviews he saw in local media, he believes many of the marchers who held those torches didn't know why they were doing so. 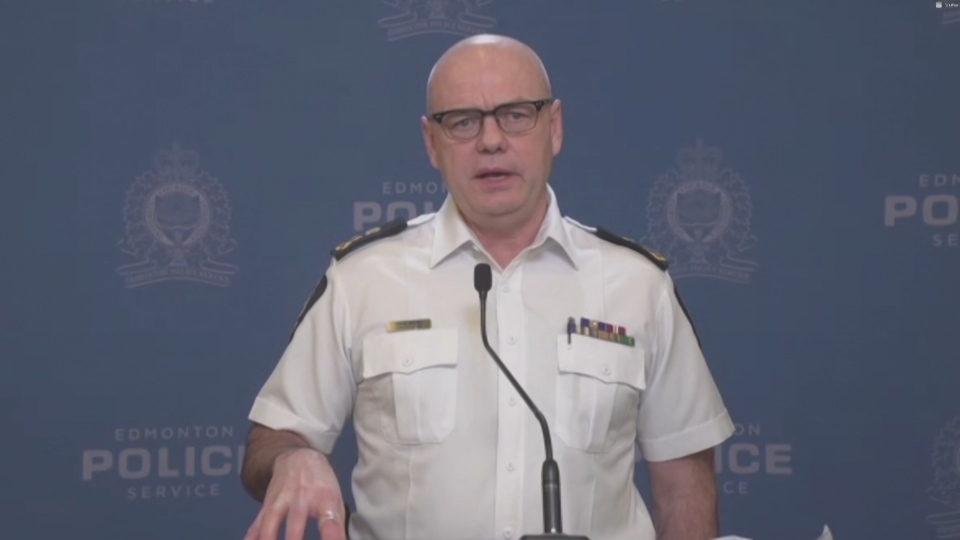 "That doesn't mean the organizers didn't think differently, but there is a difference in relation to a legal threshold."

The police chief added, if in fact those torches were meant as a nod to the deadly 2017 white nationalist rally in Charlottesville, Va., he does not condone their usage.

The Edmonton police chief's comments come a day after Calgary Mayor Naheed Nenshi left little ambiguity about his feelings on the issue, calling it "disgusting behavior" that needs to be "denounced strongly."

A member of Calgary's Black Lives Matter movement, Eve Abola, told CTV News this past weekend she has no doubt about what the tiki torches are meant to represent.

Fourty-eight hours after the Edmonton rallies, Alberta Premier Jason Kenney released a statement condemning any symbols that were used in a hateful way.

"I understand that publicity for this event incorporated an image apparently taken from the notorious 2017 Charlottesville torch rally, which was an explicitly white supremacist event," Kenney wrote.

"Prominent racists promoted Saturday’s protest at the Legislature, and individuals attended the event from known hate groups like the ‘Soldiers of Odin’ and ‘Urban Infidels’. I condemn these voices of bigotry in the strongest possible terms."

An organizer for one of the protest groups in both Edmonton and Calgary's rallies, Artur Pawalski, told CTV News last weekend it's the media that has equated the use of tiki torches to white supremacist beliefs.

"Why would you people call me a white supremacist when all my friends, my closest friends are coloured people?"

Pawalski claimed the torches are showing up at Alberta rallies as signs of hope and warmth.

According to Chief McFee, as far as burden of proof goes, Pawlaski's claims could be true.

"If the real meaning was that those were carried because of the history that was in Virginia, and then if you have that evidence when we're making those statements we would love to see it," he said. "Right now we don't have that evidence."