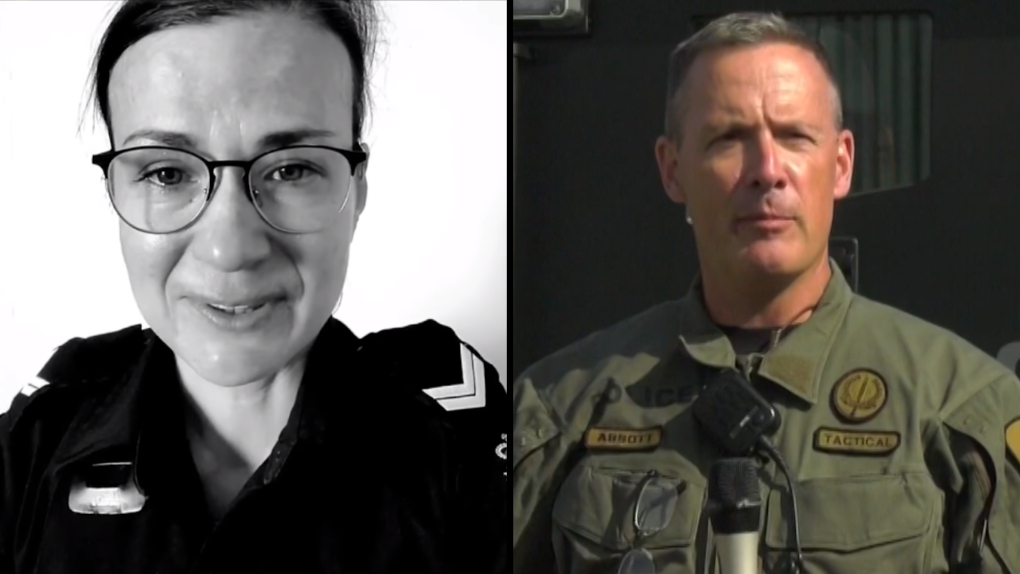 Two Edmonton Police Service officers who joined a "Freedom Convoy" rally in southern Alberta have been "relieved of duty without pay" while they await the results of a disciplinary process.

A preliminary review into the actions of Const. Elena Golysheva and Staff Sgt. Rick Abbott was over on Friday, an EPS spokesperson confirmed, but a Professional Standards Branch investigation was still ongoing.

Both officers spoke at a convoy rally on Feb. 12, near the scene of where some people illegally blocked roads and a U.S.-Canada border crossing at Coutts, Alta. A video of their speeches was posted on Facebook

"We're on a little bit of thin ice, up here doing this, but so are you out there," Abbott told the cheering crowd.

"I'm here because you have given me so much strength," Golysheva said in Coutts.

Golysheva also appeared in a tearful video thanking Ottawa convoy protesters, while wearing an EPS uniform, in which she said she would refuse "unlawful orders."

"That's not something we support or condone. Like, that's just not something that's allowed in how we actually do our police work and we have a discipline process for that," Chief Dale McFee said on Feb. 16.

EPS spokesperson Cheryl Sheppard clarified that the officers were suspended, not terminated. She did not provide a timeline for the PSB investigation.

A former police officer and some on social media have called for the officers to be fired, while some are defending Abbott and Golysheva by saying they have a right to free speech.

The blockades were ended on Feb. 15 after four of the people involved were charged with conspiring to kill police officers.