Edmonton Prospects plan to move to Spruce Grove for 2022

EDMONTON -- The Edmonton Prospects may have played their last game at Re/Max Field after the team announced its plans to move to Spruce Grove for the 2022 season.

The team announced its intentions in a release on Friday morning, two days after a group led by former Oiler Randy Gregg told CTV News it had secured a 10-year lease from the city to operate the downtown ballpark.

"Although it is true that our goal was to expand our baseball footprint two-fold in the Edmonton and metro region, circumstances sometimes dictate and force decisions that do not always align with what was initially planned and preferred," the statement reads.

"While the news regarding Re/Max Field this past Wednesday was disappointing, we again recognize the CIty's desire to go in a different direction with respect to operations."

Last August, the Prospects and Gregg's group each pitched the city its vision for the ballpark's future and subsequent lease.

After the city chose Gregg's pitch, the team says it presented his group with a joint proposal that was eventually turned down.

"Although we have presented what we feel to be a fair and reasonable revenue sharing joint venture proposal, that proposal was rejected by the Gregg Group as it did not align with their vision and ten-year model."

In November, Prospects owner Pat Cassidy told CTV News he was eyeing "a raw piece of property" along Highway 16 near Spruce Grove that could potentially house a baseball stadium, fieldhouse and microbrewery.

"There’s an opportunity when you have a little more land to do something a little more grander than the ball park itself," he said.

“A second team in a market just down the road ... that has their own identity and wants to do their own thing, that makes sense.”

Gregg indicated he had hoped the Prospects would remain at Re/Max Field as part of a plan to add a second team to be based out of the downtown stadium. 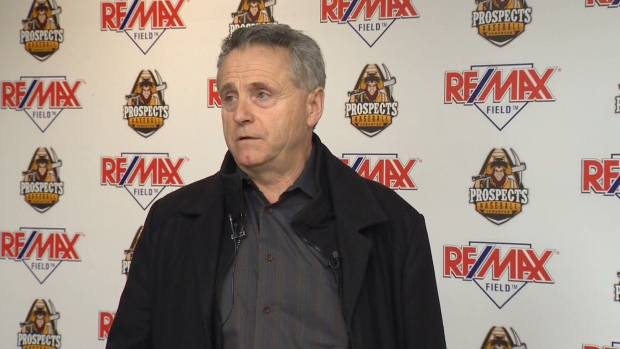 On Thursday, the Western Canadian Baseball League issued a release saying the league had not yet been involved in any formal discussions around a second Edmonton-based team.

"I attended meetings with the City of Edmonton in February where the current situation of Re/Max Field was discussed. Since that time, nothing has changed on that front meaning that the Prospects have and will continue to have the territorial rights to the greater Edmonton area," league president Kevin Kvame said in the release.

CTV News has reached out to Kvame for comment on the Prospects planned relocation.

Cassidy told CTV News that WCBL executives would meet on Wednesday to determine the future of the 2020 season.

The Prospects say should this year's season be cancelled it's working on what it terms "an alternate plan" for 2021.

"Even a partial season will be complex but please know that our ownership group is committed to making things right for all concerned regardless of what outcome eventually plays out."