For the second time in two weeks, Edmontonians and residents of the capital region woke up to icy roads and walkways after a bout of freezing rain.

A weather alert from Environment and Climate Change Canada was in effect as far north as Slave Lake and as far south as Red Deer and Stettler, and also included several municipal districts west and east of Alberta's capital city. CTV News Edmonton's chief meteorologist Josh Classen said highways from Whitecourt and Athabasca south to Red Deer and east to the Saskatchewan border were hit with freezing rain and/or wet snow.

The government weather department warned the rain and sub-zero temperatures could result in icy highways, roads and sidewalks.

Multiple collisions were reported in and around Edmonton. Ice caused three semis to slide into each other and jackknife on Highway 16 at Range Road 210, near Fort Saskatchewan, prompting a road closure in the area. No one was hurt in the incident. The area was closed to traffic until noon. 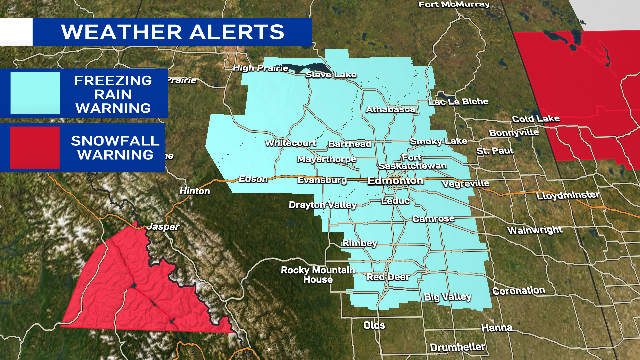 Another transport truck jackknifed on westbound Whitemud Drive near 170 Street in Edmonton. Altogether, city police received calls about 20 collisions – none resulting in injuries – between midnight and 9 a.m.

"If you can stay off highways in central and north-central Alberta, that's the safest bet this morning," Classen advised.

He added: "Some roads in the city of Edmonton are more wet and slushy, rather than hard ice. But, it may be tough to tell as other roads have glare ice that appears wet. As always, give yourself some extra time on the roads and some extra stopping time between you and the vehicle in front of you." 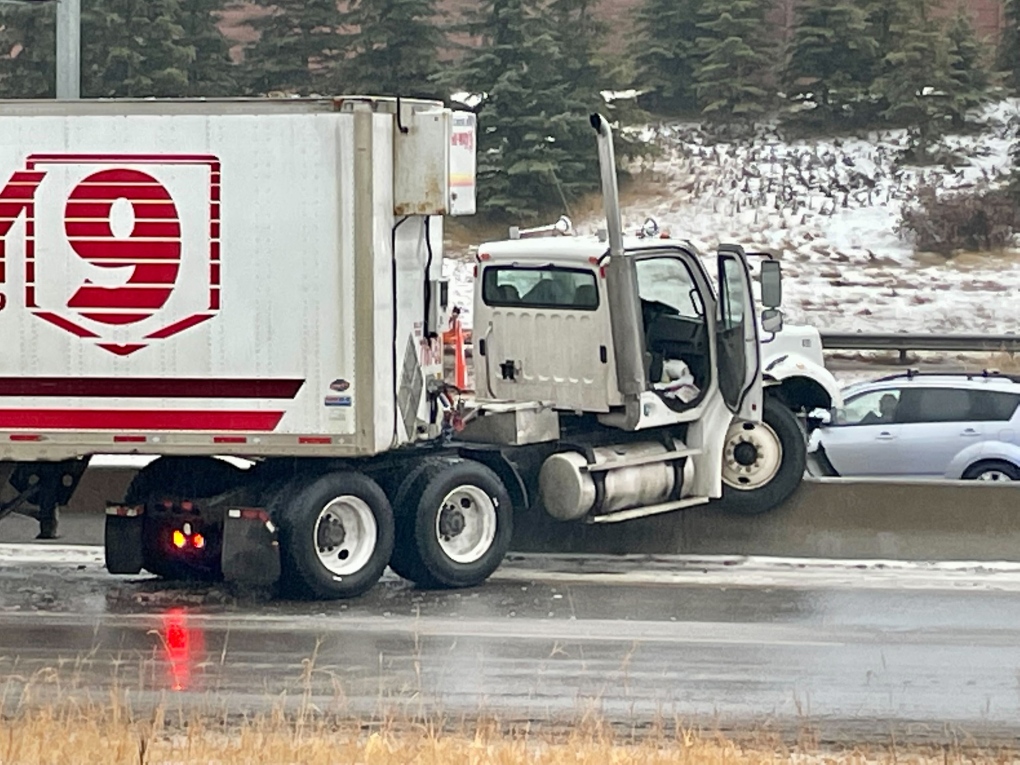 A transport truck jackknifed on westbound Whitemud Drive near 170 Street in Edmonton the morning of Dec. 8, 2021, after a bout of freezing rain. Altogether, city police received calls about 20 collisions – none resulting in injuries – between midnight and 9 a.m.

Classen expects the freezing rain to end by mid morning, as wind starts to pick up and polish surfaces. While no precipitation is forecast for the afternoon or evening, roads will likely still be very icy.

The capital region saw a bout of dangerous freezing rain two weeks ago. Three people were killed in crashes on highways outside the city, and dozens of less serious incidents were reported to police.

Several school divisions cancelled bus service Wednesday morning. This is an incomplete list and will be updated as CTV News receives new information:

A British Columbia First Nation has announced the grim discovery of unmarked graves at the site of a former residential school. According to the Williams Lake First Nation, a recent geophysical survey, which included ground-penetrating radar, revealed the existence of an estimated 93 graves.

One person has died after a crash between a horse and buggy and an SUV in Huron County, Ont. Police say the operator of the horse and buggy was taken to hospital but later pronounced dead.