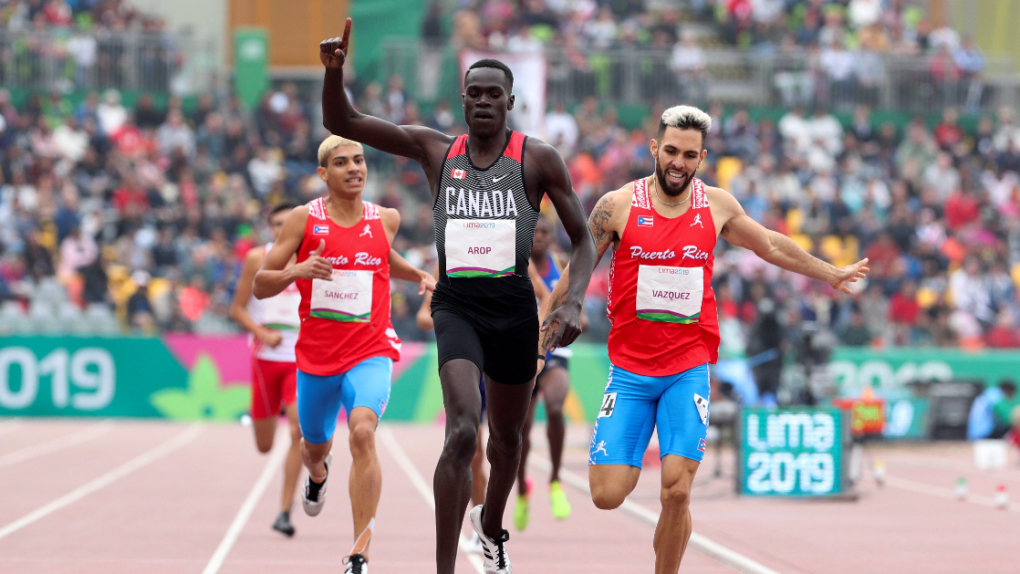 Marco Arop of Canada celebrates as he crosses the finish line to win the gold medal in the men's 800m final during the athletics at the Pan American Games in Lima, Peru, Saturday, Aug. 10, 2019. (AP Photo/Martin Mejia)

EDMONTON -- Edmonton runner Marco Arop is foregoing his final year of U.S. college eligibility to pursue a career as a pro athlete and focus on preparing for the upcoming Tokyo 2020 Olympics.

The Mississippi State runner made the announcement via a Twitter video on Monday.

"It's been my goal to be the best athlete I can be," Arop said in thanking his coaches, teammates and fans. "Although I won't be running with a Bulldog uniform moving on, I'll still be a Bulldog for life."

For those who didn’t know, I’ve made some big decisions these past few months...
•
•
•
Thank you to @hailstatetf for capturing this message and all the amazing work! pic.twitter.com/LZGSbOzNOG

Arop, 21, specialized in the 800 metres, but only began running track during Grade 12 at what is now St. Oscar Romero High School. He was born in Sudan and immigrated to Canada with his family as refugees in 2002.

For Canada, he won a Pan American Games gold medal last summer, and advanced to the finals at the World Championships in October. He's also the Canadian national champion at the distance.

At Mississippi State, Arop finished second at the NCAA championships twice and holds the school's record in the indoor and outdoor 800 metres.

"This wasn't an easy decision to make, but it was one I would have to make eventually," he told Mississippi State's website.