The company tasked with building and maintaining Edmonton's latest addition to its light rail transit network has released a more precise completion target for the southeast Valley Line LRT.

In an interview with CTV News Edmonton on Monday, an official for TranEd said the $1.8-billion project has now reached its safety and communications systems testing phase and that he expects the new line will be operational by late 2021.

"We've got a team of individuals testing every single component of the system that we built," he said. "Most of them are installed now, so they're testing those wires and the connectivity."

The roughly two-dozen trains are all in place for the low-floor transit system. The track has been laid - but the finer details are still in the works.

"We've gotten past the actual construction of the concrete work, the cables, all of that is complete," he said. "The rail is across the bridge, all the overhead catenary system that you see… is installed."

Up next for that section, said Lindskoog, is the bridge's underslung shared-use path and the reestablishment of the trail network in the river valley.

"In order to get that done though we've still got some work to do in the parks," he said. "We've got to reestablish Louise McKinney Park and Henrietta Muir Park as well."

According to Lindskoog, TransEd has a "contractural requirement" to complete the bridge's pedestrian walkway, as well as cosmetic features such as landscaping, before launching the new LRT line for public use. 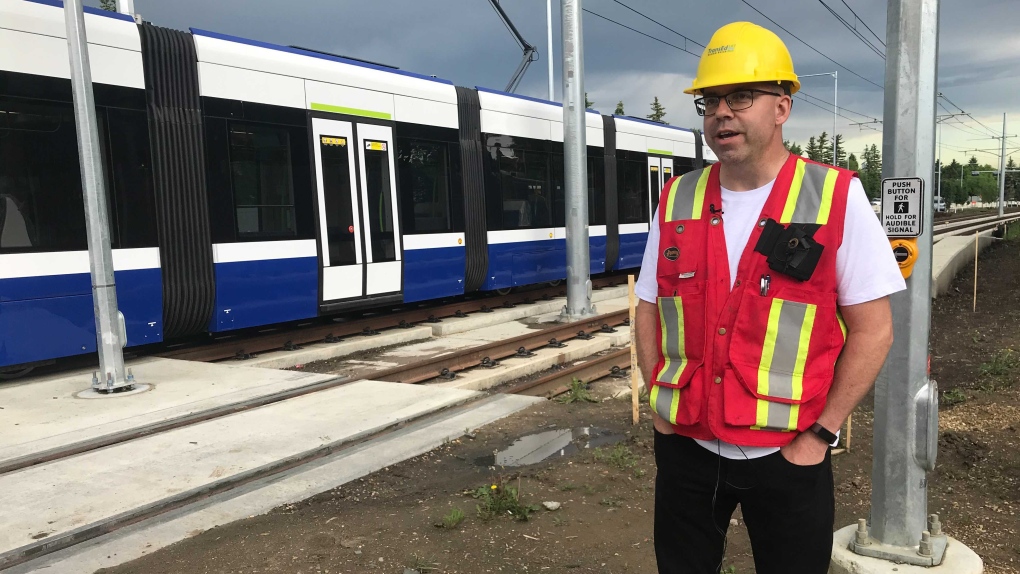 "We don't want a whole bunch of leftover work as well," he said. "We want the system completely turned over. All of the roads, all of the landscaping, all of the rail – when the train goes into operation."

Originally slated to open by the end of 2020, construction on the 13.1-kilometre line has met its share of challenges.

The first major snag came in 2018, when construction crews encountered a large concrete mass in the North Saskatchewan riverbed. That discovery meant work on the Valley Line's Tawatinâ Bridge was delayed and caused subsequent ripple effects on the rest of the project.

DELAYS DUE TO COVID-19: TRANSED

"Working with a mask on, working and maintaining distance is challenging," he said.

Lindskoog pointed to worker absenteeism due to pandemic-related family issues as one cause of construction delays.

"We've had very little positive cases of COVID on the project," he added.

According to the TransEd spokesperson, the project also faced supply issues for building materials because of COVID-19.

One major aspect of the southeast Valley Line is the twin tunnels that runs from 102 Avenue and 96 Street to Louise McKinney Park, beneath Edmonton's Quarters district.

Lindskoog said finishing touches are being completed on those, as well as the elevated platform known as Davies Station – which will include a full Park & Ride and a transit centre.

The TransEd spokesperson believes, once complete, his company's signaling system won't face any of the hiccups that plagued Edmonton's Metro LRT line in 2017.

Assuming there are no further setbacks, by 2022, Edmontonians can expect the 11-stop electric rail line to be available to transport them from millwoods to the city's downtown – and vice versa – in about 30 minutes.

TransEd will begin testing trains on Connors Hill and the new Tawatinâ Bridge this summer.

The $1.64-billion Stage 2 of the Valley Line LRT will see construction of the west section which will run from 102 Street to Lewis Farms.