EDMONTON -- In an attempt to clarify his position, Edmonton police chief Dale McFee reiterated remarks he made Tuesday about the use of tiki torches at a recent rally on Alberta's legislature grounds.

"I want to acknowledge the behaviours, associated groups and symbols of racism and hatred that were on display at the rally are something that I personally condemn and something that our police service condemns."

The chief's latest public comments on the issue came Wednesday morning at the beginning of a Facebook Live info session with the head of the EPS Hate Crimes and Violent Extremism Unit, Sgt. Gary Willits.

On Tuesday, McFee told reporters the act of carrying a tiki torch at a rally doesn't break the legal threshold to constitute a hate crime.

"We do not condone these actions or symbols that were displayed," he said Wednesday.

While McFee's clarification didn't specifically address the use of tiki torches by name, a Tweet sent out from the Edmonton police twitter account Tuesday night denounced them altogether.

The Edmonton Police Service denounces tiki torches. The presence of these symbols used in our city is concerning. There is no room for racism or bigotry in Edmonton. We understand the impact these symbols do have on our racialized community: https://t.co/Mm0NPAlM41 (2/8)

The police chief acknowledged that even though the "symbols" don't reach the threshold for police to lay charges, they are aware of what they represent.

"We know that their presence represent racism and hate and create fear within the community," he said. "We also want to recognize that the rally and recent hate crimes created fear and apprehension, especially among our racialized communities."

McFee said he wants to work with those communities "not just for understanding.

"Holding those that choose to do this willfully, where there is evidence, accountable for their actions." 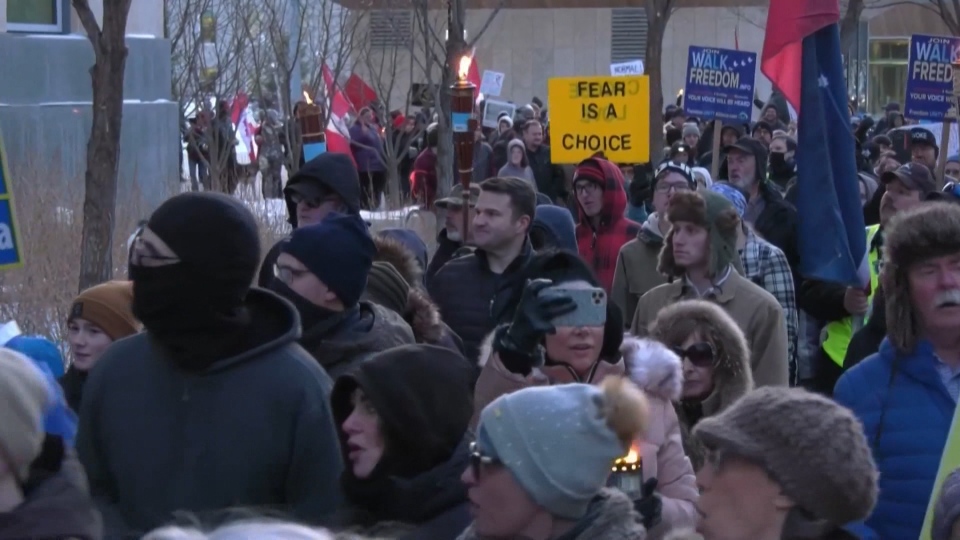 The EPS hate crimes unit was given advanced notice that known hate groups like the Soldiers of Odin and Urban Infidels would be attending the Edmonton rally. That's why that unit, which is made up of Sgt. Willits and two constables, was also present - observing whether any legal thresholds were broken.

"When we saw the tiki torches come out, right away we knew what it meant," said Sgt. Willits. "I knew it was offensive and I don't understand why people do that.

"Our hands were tied. We could not do anything against them criminally."

The unit has also been dealing with a string of alleged hate-motivated crimes in Edmonton for the past few months.

CHALLENGES OF THE CRIMINAL CODE

Irfan Chaudhry, MacEwan University's director for the office of human rights, diversity and equity, tells CTV News Edmonton the current hate crime laws are out of date, saying the last update was made to sentencing. That was in the 1990s.

"If you ask me, in the context of it being 2021, we need our laws to catch up with what’s happening to provide more autonomy and discretion for our officers, to be able to engage in these nuances."

The criminology, human rights and hate crime educator says the City of Edmonton could enact its own bylaw banning images of hate in public.

"That default response is, 'This is freedom of expression,' but when it’s the pipeline being built they’re being framed as, 'You can still protest, but if you violate these parameters we’ve given you to protest, we’re going to find you legally liable.' It goes back to the inequity of our policies."

When asked about the tiki torch issue Wednesday afternoon, Mayor Don Iveson once again denounced their use as a symbol of hate, saying he was "outraged" by the display in Edmonton. At the same time, he empathized with the position current laws put those tasked with enforcing them are in.

"Brandishing a tiki torch, I think, is fairly self-evidently a provocation and is clearly a symbol associated with white supremacy and with hatred.

"Notwithstanding that you and I all know that that is a vulgar symbol of hatred designed to provoke fear and outrage," Edmonton's mayor said. "The mechanics of actually turning that into a criminal code or hate speech charge is very challenging for the police."

The Criminal Code of Canada includes guidance that says sentences shall take into account evidence “that the offence was motivated by bias, prejudice or hate based on race, national or ethnic origin, language, colour, religion, sex, age, mental or physical disability, sexual orientation, or any other similar factor.”