The opioid crisis affecting Canadians nationwide has made itself especially evident in Alberta’s capital city.

Last month, three men were found dead in an Edmonton park from a drug overdose. That overdose was one that Jordan Reiniger, executive director of Boyle Street Community Services, told CTV News Edmonton not even naloxone kits could recover when paramedics arrived on the scene.

It’s a crisis that’s only continuing to get worse.

On Thursday, AHS put out a public service announcement stating that EMS had responded to 55 opioid-related calls in the Edmonton area from May 31 to June 1. 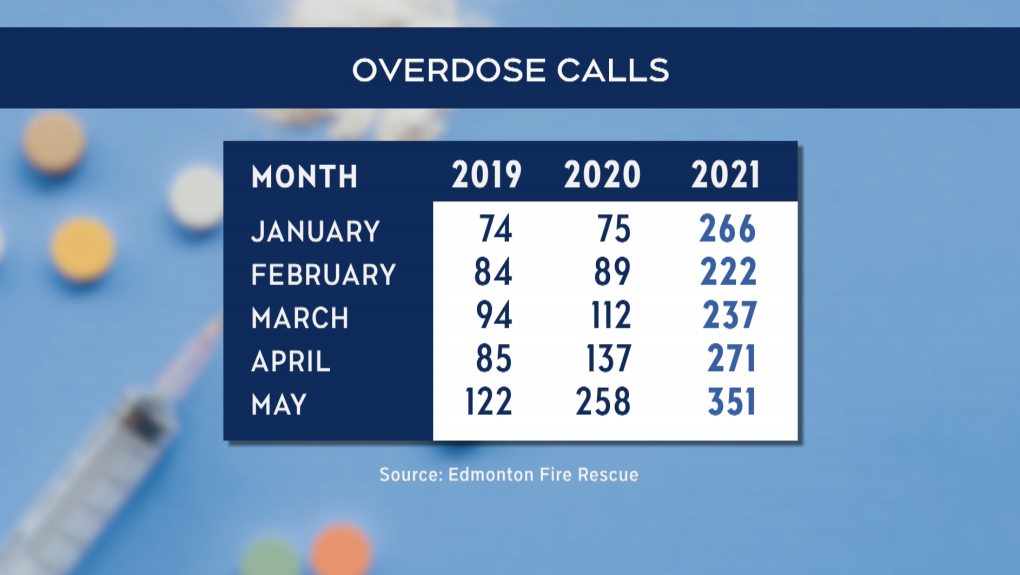 Elliot Tanti, senior manager of communications and engagement at Boyle Street, says it’s not only hard street drugs like methamphetamines being laced with what they believe to be traces of fentanyl, but also street cannabis, which he describes as especially troublesome.

“That’s an escalation for us,” said Tanti. “We’ve always said street drugs are dangerous, but now to see it in practice is really quite jarring.”

The dramatic uptick in overdose-related emergencies has also put a strain on the city’s resources and first responders.

“Our staff are incredibly resilient folks. You have to be to work in the sector that we do. But I think that this is beginning to drag on them pretty significantly,” said Tanti.

He says his teams had responded to 10 overdoses around their building before noon this Wednesday.

It’s a reflection of an epidemic that’s been swelling in both size and severity. And a lack of reliable and assessable data towards the root of the cause has been one major issue.

Elaine Hyshka, public health assistant professor at the University of Alberta, says she would like to see the province increase access to supervised essential services and other harm reduction and prevention responses but so far, she’s only seen the obstacles in the way.

“People who use illegal drugs are not going to go to a clinic or healthcare service – in possession of illegal drugs – and give their personal health number. That’s unrealistic.”

A government spokesperson told CTV News that a new recently announced framework will support addicts and surrounding communities. They say that clients won’t be refused service even if they can’t provide a personal health number.

Tanti said last week’s overdose-related deaths have prompted some conversation with both the province and the city around getting more reactive data surrounding the crisis.

“Right now there’s such a significant lag with regard to information about overdoses and where they’re occurring and what’s happening, that it’s very difficult to allocate resources to hot spots or where things could be dangerous,” Tanti explains.

“We need better access to data and we need more outreach support right now,” said Tanti. “At the end of the day, this is unprecedented.”

With files from Carlyle Fiset.

A growing number of Canadian hospitals are enacting policies requiring visitors and care partners to show proof of vaccination in order to gain entry, sparking yet another pandemic-era debate for ethicists.

A rescue mission got underway Sunday for a firefighter who fell into the St. Lawrence River after a boat carrying people from a previous rescue mission capsized near the Lachine Rapids.

Hayley Wickenheiser is a six-time Olympian and award-winning women's hockey player, and now her accomplishments include graduating from medical school and achieving an M.D. during a global pandemic.

A day at the beach turned into a proposal for Kourtney Kardashian, who is now engaged to Blink-182 drummer Travis Barker.