An Edmonton shoe shop is estimating a loss of about $30,000 after a robbery late last week.

Shane Breau, the owner of the Shoe Shine Shack, said 30 pairs of shoes were taken Friday morning after three people smashed out his store window.

“Some of them were collectors items that customers brought in for us to sell,” Breau explained. “Some of these shoes they purchased for around $300 and with the way the resell market works, they’re selling them for around $600 to $700 depending on the shoe.”

Breau told CTV News Edmonton replacing the stolen shoes isn’t just the cost of retail, it’s actually the price of what they would go for on the market.

“They go up and down like the stock market,” he said.

But for others, the robbery also represents a loss in sentimental value.

“Sometimes you’re not able to put a price on that,” he said. “Some of these shoes may have belonged to their parents, who may be deceased.”

“A lot of these shoes are very valuable to the clients whether it’s just their shoes or they belong to somebody in their family. So we’re trying to put a dollar amount on these items and it’s quite difficult.” 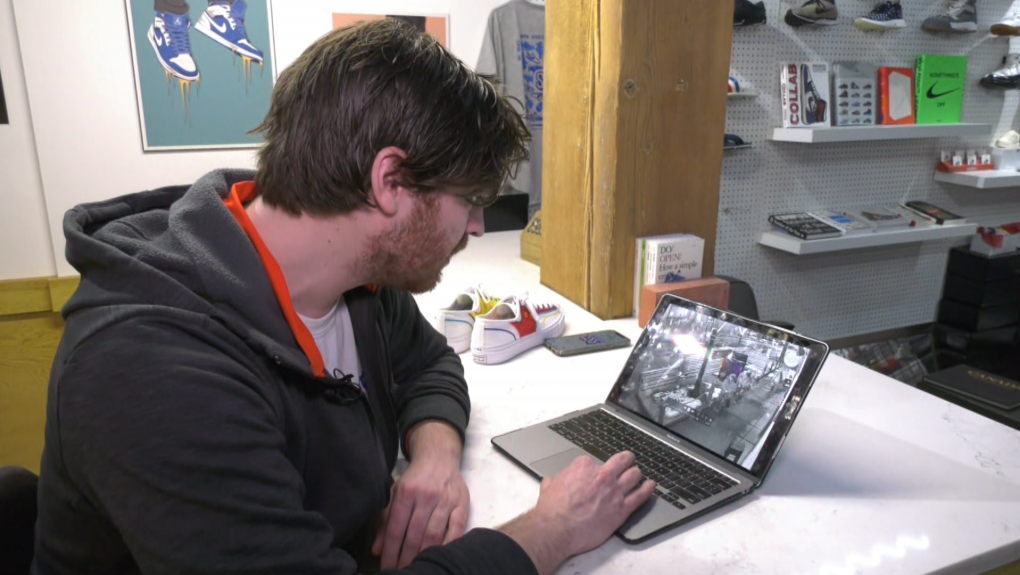 Shane Breau, owner of the Shoe Shine Shack pulled up surveillance footage of the Friday morning robbery. He said about $30,000 in goods was stolen.

Breau has been in business for four years and said this is one of the “more stressful” things he’s ever had to deal with.

“I started this business from an idea to where we are today,” he told CTV News Edmonton.

“We’ve donated thousands of shoes to the homeless community here in Edmonton and it’s very unfortunate this has happened to us right before Christmas because we do need to replace all these shoes for our customers and I’m trying to do everything I can to keep my employees in work,” he said.

Most of the stolen shoes were from the front window display featuring Louis Vuitton and Yeezy’s. Breau said it was completely “ransacked.”

So far five pairs of the shoes have been returned, according to Breau. However, he said Edmontonians should be wary if they see high-end footwear without a box up for sale.

“Not many people are buying shoes over $500 without a box,” he said.

“If you do see any of these shoes, especially with tags on them and no box included, you can almost guarantee that these shoes are a stolen item.”

Conflicting messaging from federal officials in the days leading up to the implementation of Canada's COVID-19 vaccine mandate for truckers left transport companies scrambling to recall drivers, and as a result some have had to quarantine, according to one industry group.