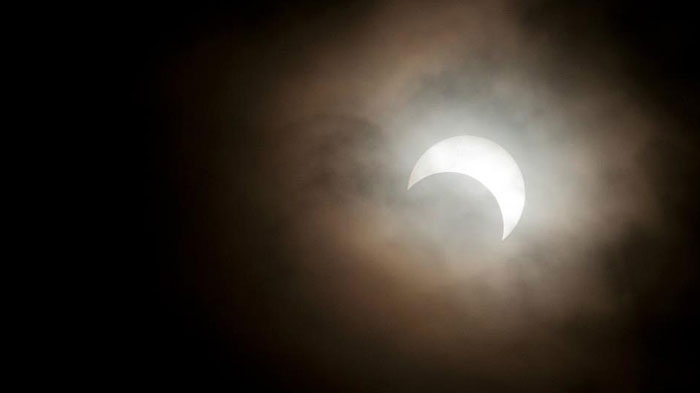 Edmontonians joined millions around the world watching as a rare "ring of fire" eclipse crossed the skies. Photo by: Shayne Bundus. May 21.

Edmontonians joined millions around the world watching as a rare "ring of fire" eclipse crossed the skies.

The eclipse, in which the moon passes in front of the sun leaving a golden ring around its edges, was visible across the continent Sunday and in parts of Asia Monday local time, as it moved across the Pacific.

The partial solar eclipse, which followed a 13,700-kilometres path, started just after 6 p.m. in Edmonton and finished around 8 p.m.

The sky was clear for the most part in the city, which meant local astronomy buffs had a clear view of the rare spectacle.

Such an eclipse won't be visible in Edmonton for another half a decade.

According to the TELUS World of Science, a similar eclipse won't return in the area until 2017.

But local sky gazers won't need to wait too long to see another rare astronomical event.

On June 5, Edmontonians will be able to view "Transit of Venus," one of the rarest predictable astronomical phenomena's.

"That's where the planet Venus travels over the disc of the sun," said Frank Florian with the TELUS World of Science.