Commonwealth Stadium will be getting much more snow than the rest of the city this week as it prepares to welcome the world's best snowboarders.

Edmonton will host the first ever FIS Snowboard Big Air World Cup to be held in a stadium. And to do it, the venue is building the biggest stadium snowboard jump in history using more than 1,200 cubic meters of snow.

"[It's a] pretty unique thing to do," said Richard Hegarty, major event specialist for Canada Snowboard. "We build these kinds of jumps on snow quite regularly, but you never get to build them in a stadium."

"This, to my knowledge, is the largest scaffolding build ever built in history."

The Big Air World Cup event, titled The Style Experience, will take place Dec. 9 and 10. It's a qualifier for the Olympics and the first North American stop of the 2022-2023 FIS World Cup season.

Hegarty said Canada Snowboard scouted locations across the country, choosing Edmonton because it's home to the largest outdoor stadium in Canada and it's cold enough in December for a winter sport event.

"It's probably easier here than it would be anywhere else in the world, so it's ideal," Hegarty said, adding that Commonwealth Stadium's layout made it the perfect spot to build the 147-foot-tall and 483-foot-long jump.

Construction of the ramp began Nov. 7 and will take around 6,000 hours in total. The snow to cover the ramp is being made at Rabbit Hill and trucked in. 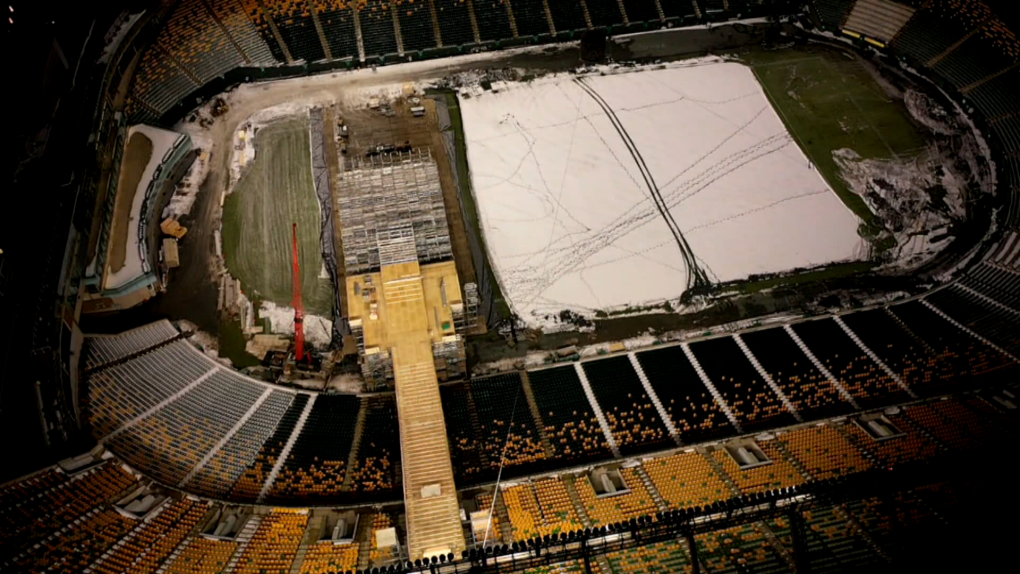 "You don't have to travel to the ski hill, and you'll probably get one of the best spectator experiences to be able to see the athletes competing live," Seutter said.

"I think Edmontonians and visitors are really going to respond well to just how unique this event is and how we've repurposed the stadium into a mountain essentially," said Cindy Medynski, director of sport and culture at Explore Edmonton.

Medynski hopes the competition will become a regular event at the Commonwealth Stadium and said the international coverage will bring in visitors and show the world what Edmonton has to offer as a host city.

"It's huge for us to get that exposure," she said. "I think [being chosen] means that Edmonton punches above its weight, and we show up and we think outside the box."

The U.S. military on Saturday shot down a suspected Chinese spy balloon off the Carolina coast on orders from President Joe Biden, after it traversed sensitive military sites across North America, becoming the latest flashpoint in tensions between Washington and Beijing.

Marit Stiles officially became the new leader of the Ontario NDP on Saturday after a majority of party members voted in favour of the lone candidate.

Eyes on the sky as Chinese balloon shot down over Atlantic

Eyes were locked on the skies Saturday as a suspected Chinese spy balloon passed over the U.S. Eastern Seaboard -- where local authorities warned civilians against taking potshots with rifles -- before it was shot down when it drifted over the Atlantic Ocean.