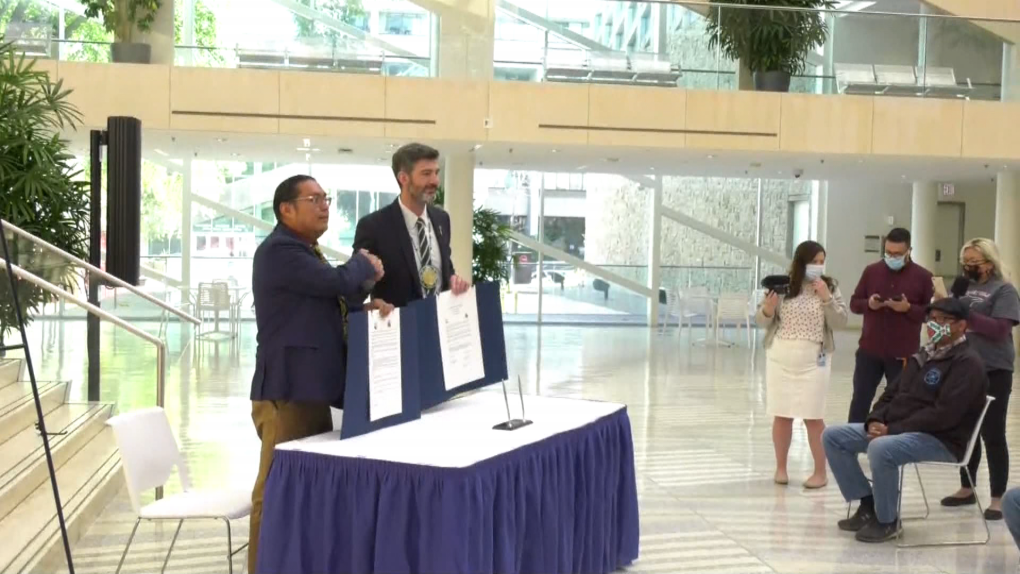 The City of Edmonton signed a pair of agreements with First Nations on Wednesday, Sept. 15, 2021. (CTV News Edmonton)
EDMONTON -

Alberta's capital city has formally renewed its commitment to working with Treaty 6 First Nations and agreed to explore an urban reserve in Edmonton with one member nation.

Mayor Don Iveson signed two memoranda of cooperation and dialogue at city hall on Tuesday: one with the Confederacy of Treaty Six First Nations and another with Kehewin Cree Nation northwest of Edmonton.

The first was a renewal of an agreement previously signed in 2012, while the second paves the way for Kehewin to create an urban reserve in Edmonton.

"This is moving from abstract to a concrete and defined work plan to develop an urban reserve with Kehewin," Iveson explained.

"It's the first; I don't think it'll be the last. There are number of other chiefs who are very interested and are watching closely what we're doing here."

Urban reserves are typically developed near or in a city as an expansion to an existing reserve. While the First Nation and federal government are the primary players in the process, municipalities provide the services and sometimes are involved in the planning stages.

"I believe this relationship is not just a symbolic gesture. It's going beyond that and having the discussions to develop a more committed relationship," he told media after.

Watchmaker said roughly half of Kehewin's 2,200 members live in an urban area; he wants the same opportunities for them as are available to other Edmontonians.

Urban reserves are considered to have boosted economic growth and revitalization in other provinces, most commonly through the creation of commercial and industrial districts.

"Revenue, I guess, that is realized in this way can be benefits going back (to the existing reserve)," Watchmaker said, noting rural reserves sometimes need better capital infrastructure.

Commenting more on the interest he's heard from other First Nations, Iveson added, "[They've] expressed interest in doing this, both as an economic development – and we welcome the investment and the jobs – and also potentially preserving culturally significant sites – such as the Enoch burial ground in west Edmonton."

As for the city's benefit, he said: "The chance to do economic reconciliation while supporting prosperity for our city and region is kind of a lovely two for one."

The city also announced Wednesday it and Edmonton Police Service will observe the National Day for Truth and Reconciliation on Sept. 30.

Iveson said the decision is part of its commitment to the Indigenous community to recognize past wrongs and build bridges for the future, and could be made after payroll and IT logistics were sorted.

Employees will be given a day of leave with pay.

They are being encouraged to use the day to learn about the intergenerational trauma caused to Indigenous people.