Edmonton weather for Feb 26: Wintry weather returns (but not for long) 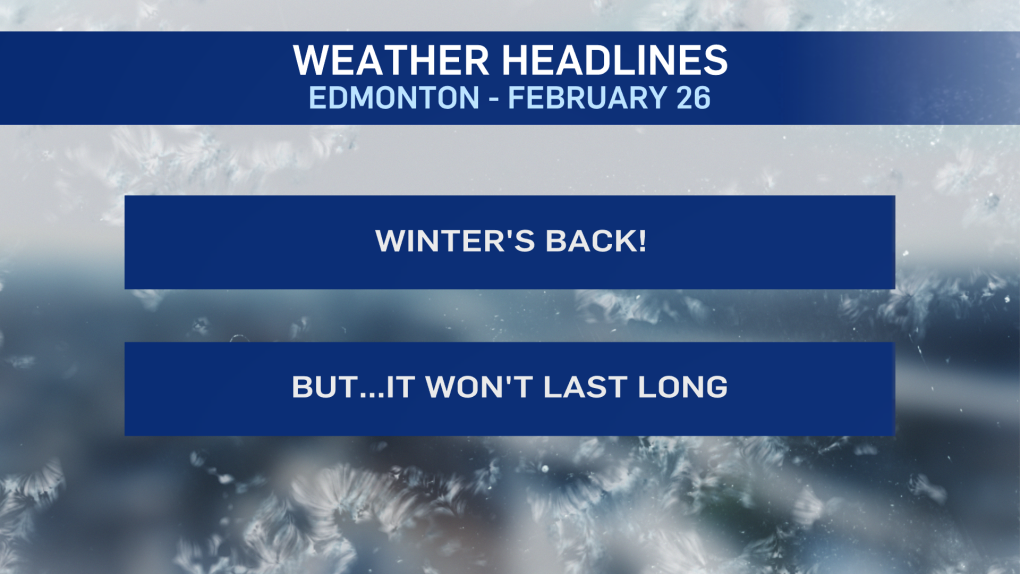 We'll break that streaky pattern over the next few days as colder air drops in today, starts to retreat tomorrow and then we're back to warmth by Monday.

The cold front dropping through produced between a dusting and 2 cm of snow across the Edmonton region early this morning.

Gusty wind accompanied that snow and temperatures dipped a bit further than expected this morning.

Minus teen temperatures and mid minus 20 wind chills across the region to start the day.

We'll see the snow continue to move south (out of the Edmonton region) this morning and the wind should ease by late morning or midday.

But, temperatures don't look like they'll move much. So...we'll be somewhere around -12 for a high this afternoon.

It'll feel a whole lot warmer later today once the wind dies down.

It's even colder to the northeast of Edmonton. Fort McMurray, Fort Chipewyan and High Level areas are under an Extreme Cold Warning.

Wind chills near or into the -40s this morning. Temperatures will get to highs in the -20s this afternoon.

Northeast Alberta stays stuck in the cold air through the weekend with highs near -15 in Fort McMurray.

In western AB, today's cooldown won't be as dramatic and temperatures will be above zero again Saturday.

Edmonton gets it's coldest day today and then Saturday should be about ten degrees warmer.

We'll drop into the mid minus teens Saturday morning. But, temperatures rebound to around -5 in the afternoon.

Sunday's still a bit of a question mark.

We have a decent chance of snow (possibly 1 to 3 cm in the Edmonton region) and temperatures could be anywhere from -3 to +2 in the afternoon.

I think we'll be just slightly below zero in afternoon and then warm up a bit in the evening.

And...by Monday we're right back to five or six degrees above zero.