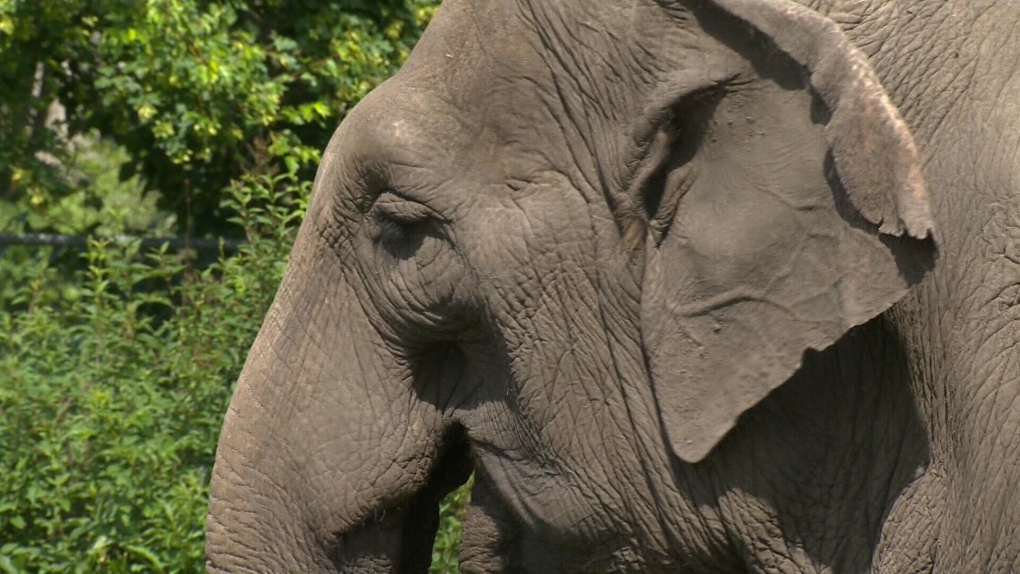 The Edmonton Valley Zoo is working to create a wading pool for Lucy the elephant as animal rights groups continue to demand her relocation to a sanctuary.

The zoo's director Gary Dewar said every year different experts come in and assess the 46-year-old elephant and the facilities. Last year, a facilities expert said that given Lucy's arthritis a pool would be therapeutic.

The zoo had already planned for an aquatics facility for a different animal species, and funding was approved, but now it hopes to tweak the design to accommodate Lucy.

"It has to have a gradual entry," said Dewar. "There likely would be a need for it to have moving water and warm water."

The zoo is also working on a proposal for the next budget cycle to make more facility improvements.

"We've made a number of infrastructure upgrades in recent years, there'll be some this summer," said Dewar.

The Edmonton Valley Zoo topped the list of "10 Worst Zoos for Elephants in North America" by California-based animal rights group In Defense of Animals (IDA).

That group says that the zoo being in a city that sees temperatures well below freezing is reason enough to make its list for the tenth time.

"How many more 30 below winters will she survive before succumbing to any of her many illnesses and conditions? Lucy’s story is a clarion call to once and for all end the cruel practice of confining elephants in zoos,” said Brittany Michelson in a statement.

Various animal rights groups and celebrities have been calling for Lucy to be moved to an animal sanctuary for years, including Bob Barker.

"Clearly they don't have an accurate picture of the real circumstances surrounding Lucy," said Dewar.

The zoo has been advised by independent experts that there is a significant risk in moving Lucy due to her serious breathing issues, he explained, and the stress of a move could lead to her death during transport.

"The zoo's long term goal is not to house elephants, the decision to bring in Lucy was made back in the 70s when she was brought in as an orphan. I think everybody would agree, if we could do it all over again, we'd likely not make the same decision."

Lucy the elephant turns 47 on Canada Day. The zoo has started her gradual retirement, where Lucy spends more of her time on the grounds rather than participating in animal talks and other zoo activities.

"Our focus now is making sure we can give her the best life possible and that's our entire focus."

Construction of the pool will start in 2023, the zoo anticipates it will be completed in Dec. 2025.

Canada's privacy commissioner says the belated disclosure that RCMP has for years been using spyware capable of accessing cell phone and computer microphones, cameras and other data as part of major investigations, is a clear example of why Canada's Privacy Act needs updating.

CRA says it has $1.4 billion in uncashed cheques sitting in its coffers

No damage reported after 4.6 magnitude earthquake off Vancouver Island

A 4.6 magnitude earthquake has struck off the coast of Vancouver Island.

Housing correction in Toronto could end up becoming 'one of the deepest of the past half a century,' RBC warns

A housing correction which has already led to four consecutive months of price declines in the previously overheated Greater Toronto Area market could end up becoming 'one of the deepest of the past half a century,' a new report from RBC warns.

For millennial and gen Z Canadians, owning a home in this real estate market might seem like a pipe dream. In an exclusive column for CTVNews,ca personal finance contributor Christopher Liew offers some strategies to consider if you can’t afford the housing market yet.

Alberta Health Services has issued an enforcement order against a Banff home after an inspection discovered that as many as 42 people were staying inside the property, saying the maximum number of occupants of the facility 'was exceeded.'

Environment Canada has extended heat warnings in a number of provinces, as unseasonably hot conditions continue across the country.

Study connects climate hazards to 58 per cent of infectious diseases

Climate hazards, such as flooding, heat waves and drought have worsened more than half of the hundreds of known infectious diseases in people, including malaria, hantavirus, cholera and even anthrax.