Rearview mirrors are in short supply at Commonwealth Stadium right now, as the Edmonton Elks do their collective best to forget the short-term past and focus on any kind of future.

"We're just looking through the windshield and where we are going," Jones said after the opening practice of main camp under a scorching sun, which had Jones draping a towel over his head for parts of the day.

But the distant past is actually what Jones will try to replicate as he returns to Edmonton seven years after the franchise's last Grey Cup championship when it was known as the Eskimos.

"We've got a big job to do. It's kinda surreal coming back after having a lot of success. It's really cool seeing some of those guys that were on that squad," said Jones, who suddenly left the double E in 2015 to coach three seasons in Saskatchewan before a short stint with the NFL's Cleveland Browns.

His monumental on-field task now is to return the Elks to respectability.

The team won just three games in 2021 and failed to give fans any success at Commonwealth by losing every home field game.

So any talk of a possible return to the Grey Cup might be seen as incredibly ambitious.

"I'm not overly intelligent so, I can't even think of how far that would be, I mean months, that is right… so we just have to put one foot in front of the other and kinda take baby steps," Jones added.

But players have already noticed an increased amount of the one factor that may be most important to any training camp, in any sport, in any league.

"He's fired up. He's ready to go. Coach Jones, of all the coaches I've had, he brings the most competition to practice, so day one, we all (are) ready to go," said David Beard, an offensive lineman who played for Jones during that CFL championship run in 2015. 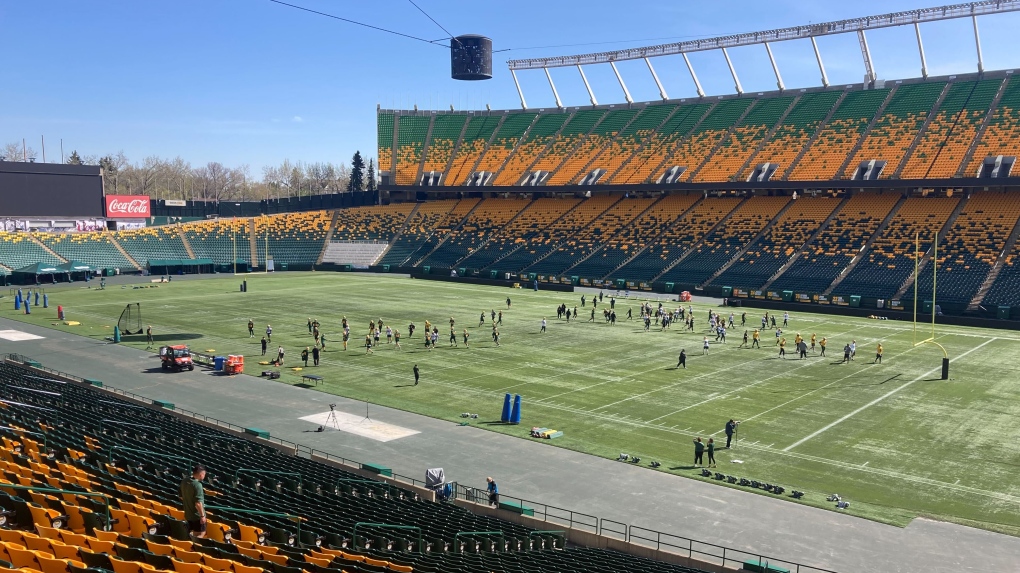 The Edmonton Elks warm-up ahead of the opening practice of main camp on Sunday, May 15, 2022 (CTV News Edmonton/Dave Mitchell).

"We got competitions going on like crazy," Beard added.

While Jones focuses on his players, the off-field problems that plagued the Elks in 2021 are starting to be resolved as well.

New team President Victor Cui has given employees, new and old, a renewed sense of pride.

The Elks have a revamped communications staff and an improved video production crew they hope will increase their social media presence with new hires.

One possible hurdle to a successful season across the entire CFL, is continued labour issues between the league and players union. Teams are unsure of players status on a day-to-day basis.

Said Jones, "I left my phone inside, so that I didn't get any kind of notification, so we will see once we go in and check the email, or the text…or check Twitter!

Elks players spokesperson Aaron Grymes told CTV News Edmonton that the CFL couldn't afford any stoppage to the season while it fights to remain relevant across the Canadian sports landscape.

"I think it's the last thing we need right now as a league, and as players, I don't think either side can afford it. Both sides want the best deal possible, and that's what they're at the (negotiation) table doing right now, hopefully right now, at this minute."

The Elks welcome fans back inside Commonwealth for a pre-season matchup vs Calgary on June 3rd for Stand With Ukraine night. All proceeds from the $15 tickets will go to the Canada Ukraine Foundation.

BREAKING | Several taken to hospital after shootout erupts at bank in Saanich, B.C.

Five people were taken to hospital and two suspects have been arrested after a shootout with police at a bank in Saanich, B.C.