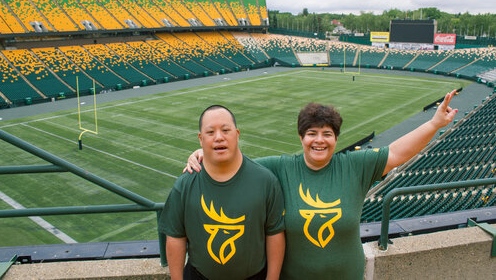 In an effort to create a more inclusive workplace, the Edmonton Elks, with the creation of the Joey Moss Memorial Fund (JMMF), will assist more people with disabilities find employment through Winnifred Stewart.

Chris Presson, CEO and president of the Edmonton Elks, said the new partnership with the Winnifred Stewart Association will allow for the CFL team to employ more people with disabilities. He hopes the partnership will allow for people with disabilities to receive the same work opportunities, while creating a more positive business. The Elks have made it a responsibility to build a stronger community by diversifying the team’s culture.

Supported by the Joey Moss Memorial Fund (JMMF), the Elks have hired two new employees with developmental disabilities, Craig and Carmela. The two have joined the marketing and ticket teams, bringing a positive impact to the Elks business, according to Candace Smallwood, director of development and communications for Winnifred Stewart.

“They have done more for us than we have certainly done for them. They have raised the level of joy in our office,” said Presson.

Moss served as an icon and a leader for people with disabilities, working as a locker room attendant for the Edmonton Oilers and the Edmonton Elks.

Winnifred Stewart launched a 10-week program in May to assist those with disabilities in preparing for employment. The program offers job-search preparation, work experience, and a boost in self-confidence and work knowledge.

“The folks that I know that do have a disability, they bring something different to the table. They are genuine, caring, honest, and it changes a workplace culture,” said Smallwood.

Smallwood says Craig and Carmela light up the room.

“We know we can be better. We are trying to be better in every facet of our business. They are exemplary examples of giving someone a chance to succeed,” said Presson.