Big screens, a stage and a mini-rink were all being erected in the plaza Wednesday, as Rogers Hometown Hockey heads to Edmonton this weekend.

"We talked about it for a long time, that this is the epicentre of energy, and so now it’s our job to bring it to life," said Tim Shipton of Oilers Entertainment Group.

With the Oilers holding down a playoff spot Wednesday, excitement is also building for what could happen if they make it.

"We’re going to program this thing to the hilt. We want this to be the place that people come before games, tailgating. There will be family activities, really bring it to life," he said.

The plaza is ready to start hosting, but construction in Ice District is far from over.

New restaurants, patios and stores still need to be added and another 16 storey office tower is planned, all with a completion target of 2025.

Even an early version of the plaza being complete is music to the ears of nearby entrepreneurs, the president of the Downtown Business Association said.

"The economic benefit of having that arena in our downtown, especially in the scenario where we’re heading into maybe a playoff run, it is massive," said Puneeta McBryan.

Two years of pandemic shutdowns, declining traffic and a rise in public disorder have been tough on businesses in the core, she said.

"I think a lot of that negativity that people might be feeling about downtown really does fall away once, all of a sudden, your streets and your businesses are full of people again," McBryan predicted 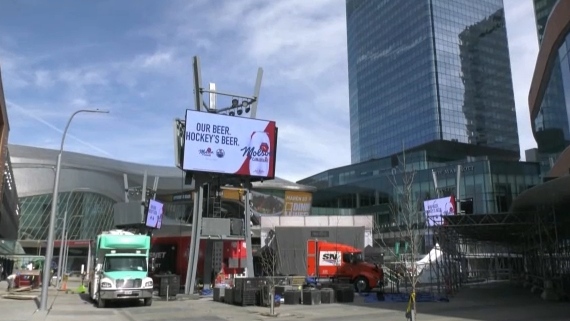 Making downtown a more lively and fun place to be was central to the district's vision all along, and a key element of the sales job that saw millions of public dollars spent to build Rogers Place.

The Oilers also spent hundreds of millions rebuilding the area, so team officials and local business owners are hoping those investments soon pay off for everyone.

Experts say Canada's plan to increase immigration may ease some pressures in the labour market, but bigger changes are needed to ensure new permanent residents are matched with the jobs that most need filling.

An Alberta First Nation is to sign an agreement today with Ottawa giving it the autonomy to administer its child welfare.

Health Canada is encouraging Canadians to check their cupboards and kitchen tables as the agency has recalled more than 30 types of Indigo-branded items including ceramic mugs, mug ornaments and houseware products due to potential mould contamination.

Radioactive capsule that fell off truck found in Australia

Authorities in Western Australia on Wednesday recovered a tiny but dangerous radioactive capsule that fell off a truck while being transported along a 1,400-kilometre Outback highway last month in what an official said was like finding the needle in the haystack.

Fear of disappointment? This is why you should say 'no' more

Many people have a hard time saying 'no,' a psychologist says, but the reluctance to let others down has widespread mental health impacts.

'We're all Tyre': Family prepares to lay Nichols to rest

The family of Tyre Nichols plans to lay him to rest on Wednesday, three weeks after he died following a brutal beating by Memphis police after a traffic stop.

Tom Brady retires, insisting this time it's for good

Tom Brady, who won a record seven Super Bowls for New England and Tampa, has announced his retirement.

A suspect in a violent kidnapping in Oregon died of a self-inflicted gunshot wound Tuesday night after being taken into custody following a standoff with law enforcement, a police spokesman said.