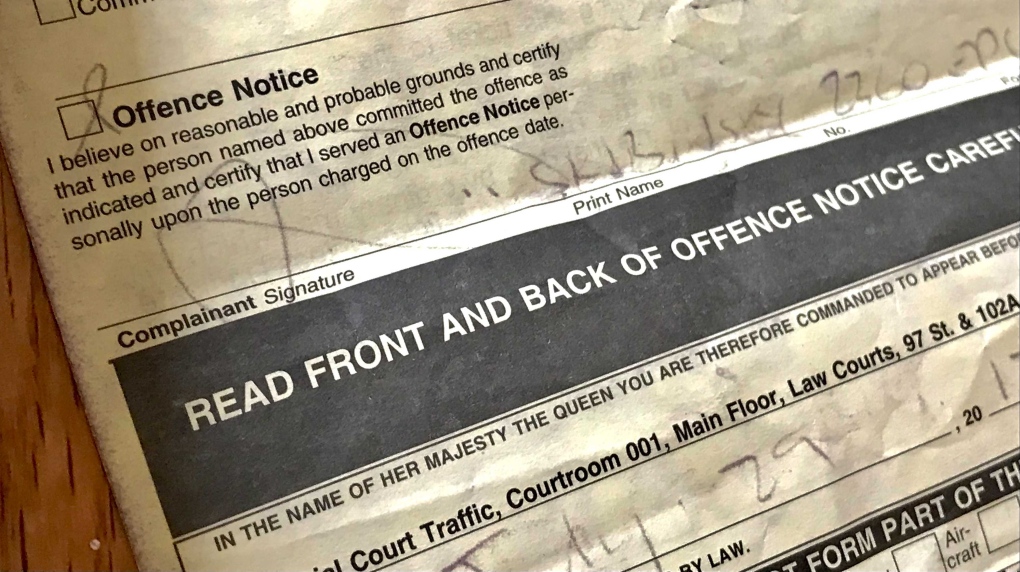 An EPS officer has been found not guilty of forging speeding tickets. (CTV News Edmonton)

EDMONTON -- An Edmonton police officer has been found not guilty of forging dates on speeding tickets, but he now faces an internal review, as more details of the case come to light.

Edmonton Police Service announced charges against its own Const. Lauren Skibinsky in June 2019.

Those allegations included obstruction of justice, forgery, and misconduct of officer executing process of the Criminal Code.

Alberta Justice confirms the case was tried in Calgary in January and Const. Skibinsky was found not guilty.

CTV News Edmonton has learned the officer is now the subject of an internal investigation by the force’s Professional Standards Branch.

CTV News Edmonton obtained one of the tickets written and signed by Skibinsky in 2017.

The ticket was issued on May 19, 2017 during a laser speed trap on 137 Avenue where the road passes under the Henday in west Edmonton.

The court date on the fine handed to the driver read July 29, 2017, which was a Saturday. But the copy of the ticket sent to the court was altered by someone to read July 28, 2017, according to a copy CTV News Edmonton viewed on Thursday.

The ticket was paid by the driver and later refunded by government cheque. The letter with it said the ticket had been “expunged,” but did not explain why.

The original ticket handed to the driver was collected as evidence by an EPS detective on Thursday. He would not say exactly how many tickets were allegedly altered outside of “a lot.”

Skibinsky, now a 19-year member of EPS, was reassigned to an administrative position during the court proceedings. His employment status now is not clear.

EPS said in a statement that they will now be “proceeding with an internal investigation, as per normal practice.”