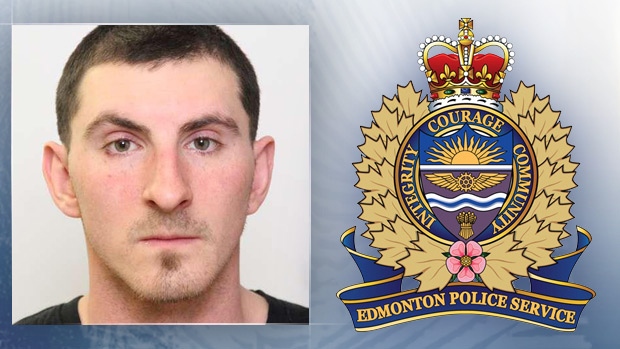 Austin Mackenzie Southworth, 26, is seen in a photo released by EPS on Wednesday, September 7. Police said the photo was taken before Southworth got tattoos on the front of his neck.

Edmonton police said Wednesday that they were trying to track down a suspect, believed to have been involved in the slaying of a Nova Scotia man in April.

Police said a Canada-wide warrant had been issued for Austin Mackenzie Southworth, 26, in connection to the homicide of Brad MacDonald, 37.

The investigation started after officers were called to the area of Stony Plain Road and Winterburn Road at about 8:30 a.m. Sunday, April 10, 2016, after MacDonald’s body was found in a field north of the 215 Street traffic ramp.

Investigators confirmed later that the deceased had died as a result of blunt force trauma.

Southworth is described as:

Police said Southworth has several tattoos, including a tattoo on his left hand, which reads “brothair”, a full-sleeve tattoo with tribal markings on his right arm, and star-shaped tattoos on the front of his neck.

Police released an undated photo of Southworth, without his neck tattoos.

Southworth is wanted on charges of second-degree murder, possession of a dangerous weapon and robbery.

It’s believed Southworth could be on Vancouver Island, and may be driving a blue 2004 Mazda MPV minivan, with an Alberta licence plate BPB 4769, with a broken driver’s side window.

Anyone with information on Southworth’s whereabouts is asked to call the Edmonton Police Service at 780-423-4567 or #377 on a mobile phone.