EPS use of force up in 2020, chief cites pandemic as factor

EDMONTON -- A new report shows use of force by Edmonton police officers rose in the first half of 2020, though the service attributes the difference partially to the pandemic.

Between the first and six month of the year, the overall number of files at Edmonton Police Service was 6.8 per cent lower than for the same timeframe in 2019.

However, force had been used by officers 11.9 per cent more in that period.

At a police commission meeting on Thursday, he said the trends were partially the result of an uptick in mental health and addictions calls and simultaneous increase in off-ramping.

“The whole idea of it is not to necessarily put people in jail,” he commented.

“The chief has been preaching that and the older folks are just getting used to it, but we’re starting to see the benefits.”

Chief Dale McFee echoed the idea that COVID-19 is likely a factor in the increased use of force, telling the commission, “What we need to be aware of is a lot of clashing factors right now.”

In both years, use of force occurred less than one per cent of the time.

Thursday’s statistics show police have used Tasers more, but firearms less. Baton use and contact by police dogs are also down. 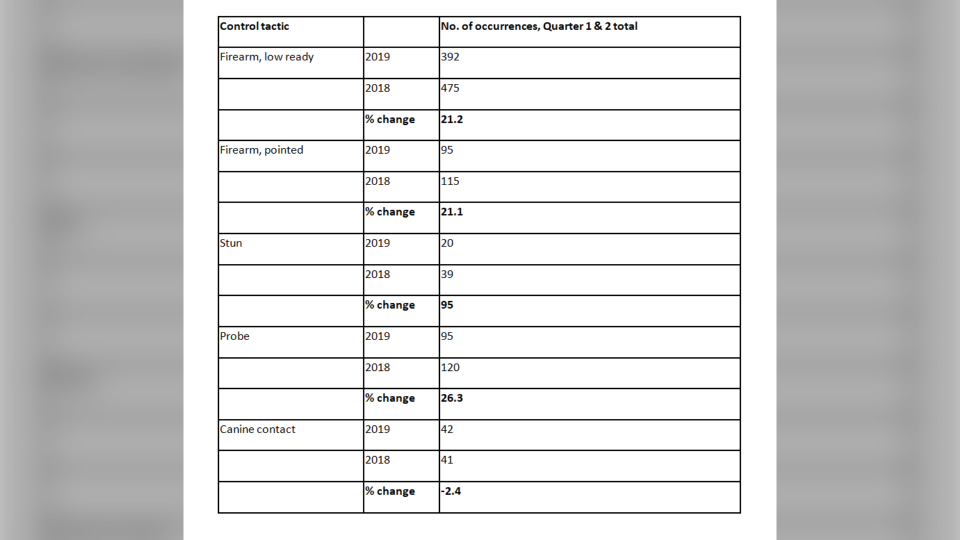 The inspector said he had already reached out to his counterparts, and added in October a training advisory committee would be reinstated to look at modernizing learning. The EPS is also developing a “dashboard” that would update data about use of force incidents daily.
According to Hermanutz, the numbers are in line with other Canadian cities, though a closer comparison was requested by commission members.