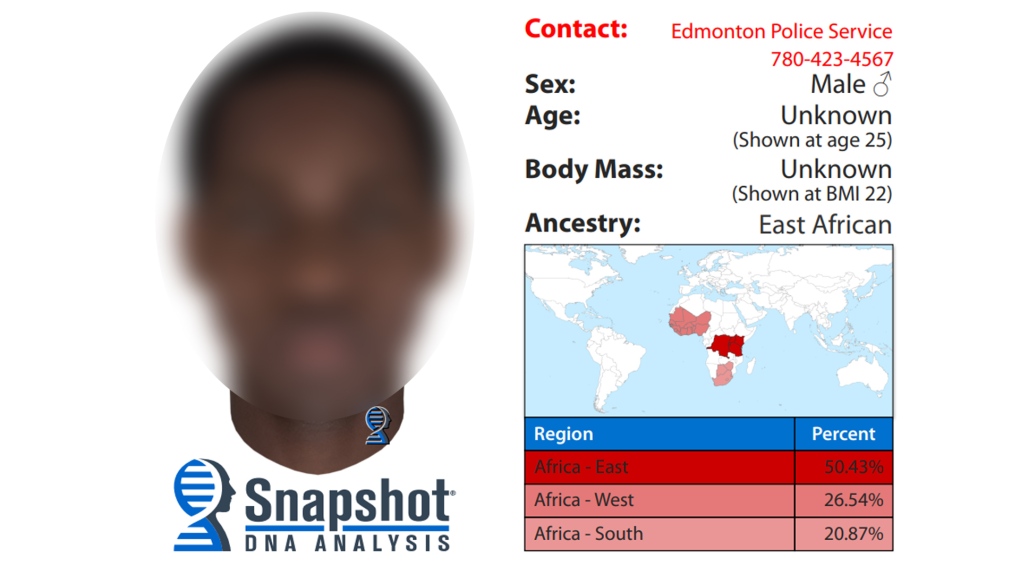 A composite sketch of a suspect in a 2019 sex assault in Edmonton was released by police in October 2022. The image was generated by Parabon NanoLabs in Virginia and cannot predict age, body composition, or environmental and stylistic factors.

Two weeks after the Edmonton Police Service apologized for releasing a generic computer-generated image of a Black man suspected of sexual assault, the service has been directed to refine it's process.

The image, created by a technology company in Virginia from the assailant’s DNA using a technique called phenotyping, was released on Oct. 4. An apology was issued two days later.

"The issue here that was created was sending a generic photo out. That's not going to happen. That's obviously put on hold…We shouldn't have done that," EPS Chief Dale McFee said Thursday.

In a unanimous vote, the Edmonton Police Commission gave EPS 30 days to come up with a community and expert oversight model to advise on how to ethically use similar technology in the future.

"We need to have something like this in place to ensure that we're looking at this for more than, say, an investigative angle," McFee told reporters after the vote.

Some feel EPS shouldn't be using the technology at all, including Haruun Ali who said the image looked like any Black man, including him.

"DNA phenotyping is not appropriate. It's not okay for us to be doing and the community doesn't want it. I don't know how more clearer we can be," said the community organizer who also regularly addresses the commission.

"Trust the community. The community knows best. We're tired of not being trusted."

A post-doctoral research fellow at Georgetown University called use of DNA phenotyping "incredibly dangerous" and a "recipe for straightforward racial profiling."

But at least one commissioner believes that, if refined, the technology could help make Edmonton a safer city. She doesn't want to take a tool away from the police.

"And so this is about how might we see justice for sexual violence."