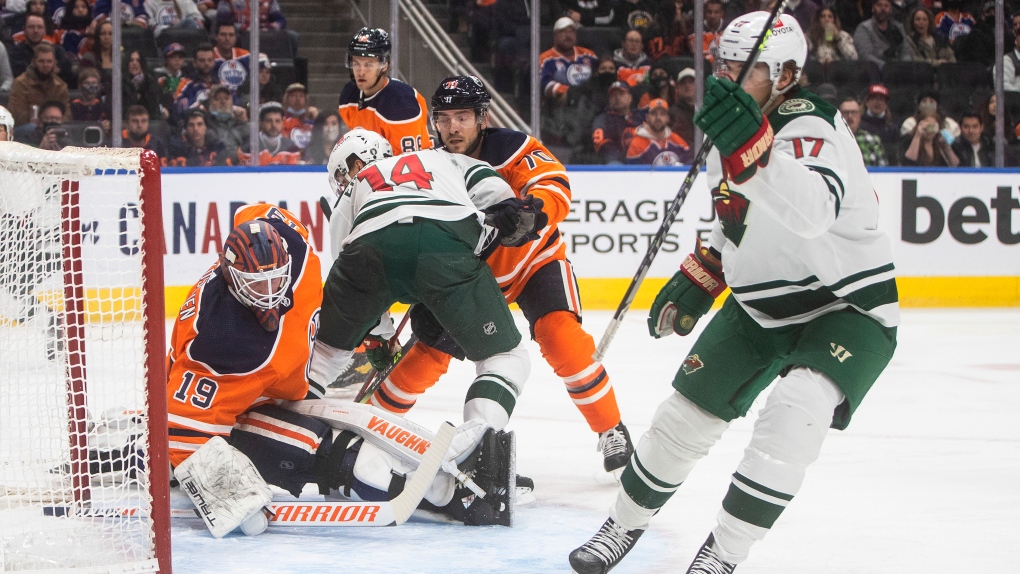 Joel Eriksson Ek had a goal and an assist as the Minnesota Wild won their seventh straight game, rolling over the Edmonton Oilers 4-1 Tuesday.

Marcus Foligno, Victor Rask and Dmitry Kulikov also scored for the Wild, who improved to 18-6-1.

Jesse Puljujarvi had the lone goal for the Oilers (16-8-0) who are mired in a three-game losing skid.

The Oilers once again found themselves down early as Minnesota started the scoring just 1:11 into the opening period on the power play. Eriksson Ek poked a puck that Edmonton goalie Mikko Koskinen had jammed against the post with his skate into the net for his 10th of the season.

The Wild made it 2-0 seven minutes into the first period as Matt Dumba made a nice feed to a hard-charging Foligno, who redirected the puck into the net for his 11th.

Edmonton got a goal back six-and-a-half minutes into the middle frame as Connor McDavid fed Puljujarvi during a battle in front, and he sent it past Wild goaltender Cam Talbot.

The Oilers outshot Minnesota 20-6 in the second period.

Minnesota restored its two-goal lead five-and-a-half minutes into the third as Jonas Brodin sent it through to Rask, who had a wide open net to shoot at before Koskinen could get across.

The Wild put the game away with five minutes remaining as Kirill Kaprizov sprung Kulikov for a rare defenceman breakaway and he made the most of it, undressing Koskinen for his third goal of the season.

Both teams return to action on Thursday. The Wild are in San Jose to face the Sharks, while the Oilers play the third game of a six-game homestand against the Boston Bruins.

This report by The Canadian Press was first published Dec. 7, 2021

'Embarrassment for the industry': Not all truckers support the 'freedom convoy'

As a convoy of truckers head to Ottawa to protest the federal government's cross-border vaccine mandate, some truckers are distancing themselves from the movement as it attracts support from fringe groups and generates dangerous rhetoric.

An Amber Alert has been cancelled after police say a two-year-old boy was discovered safe in a Calgary home Thursday evening.

While vaccines have played a major role in protecting long-term care homes from the same deadly toll the first wave of COVID-19 took on residents, the impact has still been profound during the Omicron wave.

As a convoy of truckers made its way through Ontario on Thursday, hundreds of supporters gathered along roadways and overpasses in the Greater Toronto Area, with police warning of major traffic delays.

Residents of a Ukrainian city near the Russian border who have sought to distance themselves from the historical influence of their neighbour are now feeling the unease of a potential invasion.

CTV NEWS IN AFGHANISTAN | 'We have nothing now': Female taekwondo star banned from sport by Taliban

Anzorat Wali is a female Afghan taekwondo star who took up the sport to learn self defence. She swiftly began earning medals, more golds than she can remember, but her dream of competing in the Olympics died the day the Taliban arrived. 'We have nothing now. We have nothing,' she tells CTV National News' Paul Workman in Kabul.

Jann Arden says pandemic has given her 'time to be reflective'

Canadian musician Jann Arden said writing her newest album in the middle of the pandemic gave her 'a lot of time to be reflective.' The writing process for 'Descendant,' Arden's 15th studio album out Friday, began in the spring of 2020, in the early days of the global outbreak of COVID-19.

MPs are being warned about security risks related to the trucker convoy heading to Ottawa, gas prices could hit record highs in parts of the country, and sentencing submissions are expected in an Ontario terrorism case. Here's what you need to know today.

Gas prices are expected to reach record highs in parts of the country ahead of the weekend.