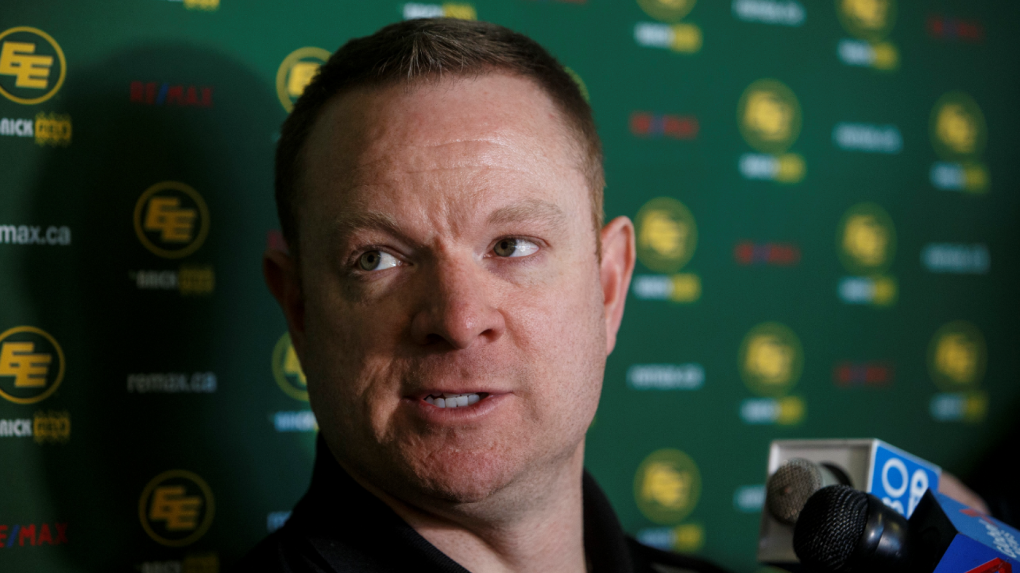 Edmonton Eskimos General Manager Brock Sunderland speaks to media after being knocked out of the Eastern final on Sunday, in Edmonton, Alta., on Monday November 18, 2019. THE CANADIAN PRESS/Jason Franson

EDMONTON -- A former Edmonton Eskimos front office employee is suing the team for wrongful dismissal, and alleging he was also asked to help the club circumvent the Canadian Football League’s salary cap.

Kyle Thorne worked as the Eskimos director of human performance between February of 2018 and November of 2019.

Thorne says he was unfairly fired over an $800 accounting error and for refusing multiple requests from general manager Brock Sunderland to keep healthy players on the team’s injury list where they wouldn’t count against the team’s salary cap.

"It was super uncomfortable. It felt like I was being set up to be a fall guy if anything ever happened," Thorne said of the requests he says were made as a personal favour from the general manager.

The allegations are outlined in a statement of claim obtained by CTV News and filed in Alberta Court of Queen's Bench on April 2.

“[The team’s] conduct was high handed, harsh, reprehensible, abusive and contemptuous of Mr. Thorne’s rights or otherwise offended the ordinary standards of morality or decent conduct in the community such as to be deserving of sanction by way of an award of punitive damages,” reads the lawsuit.

The team issued a statement on the allegations while also declining further comment with the matter before the courts.

“The Edmonton Eskimos are aware of the allegations by a former employee,” the statement reads.

“We have conducted ourselves appropriately at all times, as has our general manager. We deny the allegations and will be defending this claim."

Thorne's allegations have not been proven in a court of law.

Part of Thorne’s job was to run the team’s meal program where players and coaches were partly reimbursed by the Eskimos for their meals.

“I was just asked to run this program and solve a problem on the cheap which is kind of the way the CFL is,” he said. “Things are done on low budgets.”

On Nov. 28, 2019, Thorne says he was called to a sudden meeting with team executives and asked to explain how he was administering the program and provide a statement of accounts.

“I had no heads up,” he said of the meeting. “They explained to me it had to do with the salary cap.”

Thorne said he was asked to provide the accounts as soon as possible, and delivered them to other front office staff about three hours later.

He said he later realized his accounting contained an error and at 6:30 a.m. the next day emailed a corrected statement of accounts.

At 12:30 p.m. on the same day, he was called into a meeting and given his termination notice with the team alleging he had stolen money from the program.

“[The team] has conducted an investigation into your involvement in the misappropriation of [team] funds and has concluded that you did in fact indirectly divert funds from [the team] for your personal benefit,” read the letter, as documented in the lawsuit.

Given the less than 18 hours between the time he made the error and his termination, Thorne doubts there was any investigation at all.

He denies pocketing any money and says the difference amounted to about $800.

“There was a mathematical error that occurred. I was astounded,” he said. “I fixed it and was then subsequently fired for running that program.”

Thorne has worked as a strength and conditioning coach for the National Football League’s New York Jets and the then-San Diego Chargers. In between, he worked as a fitness and performance coach for Everton Football Club of the English Premier League.

In his role with the Eskimos he says he was also in charge of clearing injured players to return to practice.

“I was the final step to clear players to go back into practice,” he said.

The CFL salary cap rules only apply to active players, and not ones on a team’s six-game injury list.

He says he balked at Sunderland’s alleged repeated requests to keep ostensibly healthy players on the injury list, which would keep the team under the salary cap.

The CFL salary cap establishes the maximum amount a team can pay its players over the course of a season, with the 2019 cap set at $5.70 million per team.

Violators are fined based on how much they exceed the cap, but those who exceed the cap by more than $100,000 can be forced to forfeit draft picks. That team’s cap is also reduced for the forthcoming season.

In 2011, the Saskatchewan Roughriders were forced to repay the league close to $27,000 after exceeding the cap by the amount.

More recently, TSN reported that salary cap mismanagement was part of why the Montreal Alouettes suddenly relieved former Eskimos defensive back Kavis Reed in July of last year as the team’s general manager.

The CFL announced it was postponing the start of its 2020 season until at least July in the wake of the ongoing COVID-19 pandemic.

An American citizen, Thorne moved to Edmonton with his family and secured a temporary foreign worker visa to take the job with the Eskimos. But, the terms of the permit also prevent him from working for anyone else, or in any other location.

Part of the damages he’s seeking includes the cost of applying to become a permanent Canadian resident which would allow him to seek employment elsewhere.

The terms of his permit state he and his family must leave Canada by February next year.

“We’re just trying to figure out what our next step is to make ends meet.”