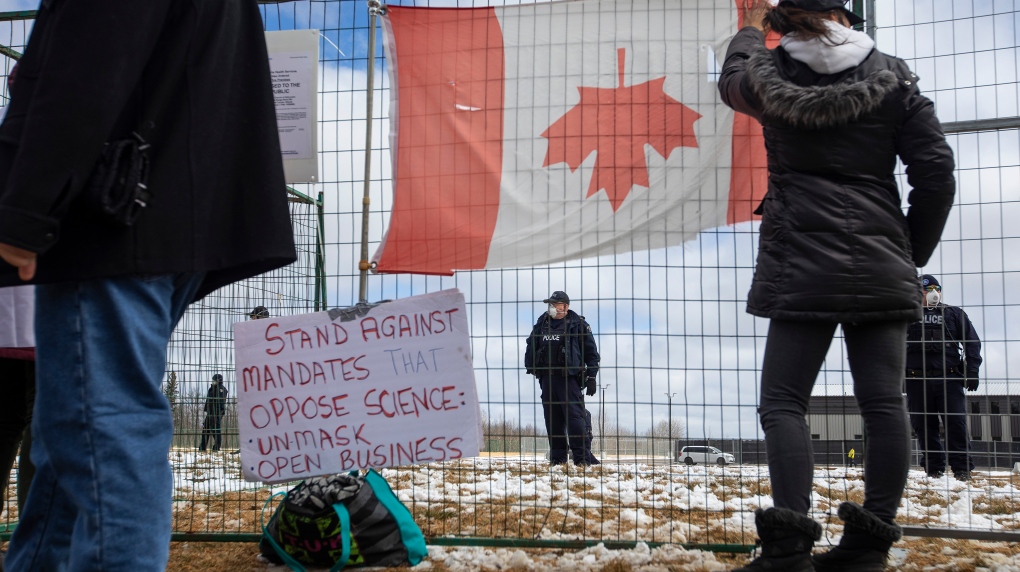 Supporters gather outside GraceLife Church near Edmonton, Alta., on Sunday, April 11, 2021. The church has been fenced off by police and Alberta Health Services in violation of COVID-19 rules. THE CANADIAN PRESS/Jason Franson

SPRUCE GROVE, ALTA. -- An expert investigating hate groups says a weekend gathering outside an Alberta church charged with violating COVID-19 regulations is exemplary of the increasing number of far-right groups and conspiracy theorists who've latched on to the anti-lockdown and anti-mask movement.

Up to 500 people gathered outside GraceLife Church west of Edmonton on Sunday, four days after Alberta Health Services shut down and fenced off the building. The health agency says it will remove the fences when the church shows it will comply with public health measures meant to contain the spread of the virus.

Dozens of police officers monitored the crowd as some sang hymns, read from a Bible and prayed for the church to reopen. Several others were heard yelling that the pandemic is not real and is made up by the government, which are all conspiracy theories.

In the afternoon, some tore down fences, but RCMP immediately intervened and put the metal guards back up. Police said in a statement they will only use the level of intervention necessary to maintain peace, order and safety.

“It would be accurate to say that the event attracted far-right and right-wing conspiracy-minded individuals for sure,” said Elizabeth Simons, the deputy director of the Canadian Anti-Hate Network, who was monitoring the crowd.

GraceLife Church and its pastor, James Coates, are charged under the Public Health Act for holding services that break health restrictions related to capacity, physical distancing and masking. They have a trial set for May.

The church said in a statement that members of its congregants were not at the Sunday gathering, and that it has no control of the building or its grounds at this time.

“The closing of the Grace Life facility has understandably resulted in significant public outrage and caused even larger crowds to gather in one place. Albertans have a constitutional right to assemble, associate, and worship,” the statement said.

Simons agreed many of the people participating in the demonstration were not associated with the church and it included a familiar set of characters from Canada's hate movements and their supporters.

She says she saw many holding signs warning of tyranny and communism, and many also falsely said mosques were allowed to hold services without restrictions, and only churches are being attacked.

“We feel that the anti-lockdown and the anti-science movement is one of the biggest threats that we're facing.”

Simons says everyday people who may be vulnerable and lack critical thinking skills or media literacy are more susceptible to far-right messaging.

Alberta's Premier Jason Kenney was asked during a news conference on Saturday what his message would be to people who might plan to attend the gathering at GraceLife Church on Sunday.

“My message for any Albertan would be to take COVID seriously and to keep people safe,” Kenney said.

“My message to people of faith in particular would be that if you believe in the sanctity of human life, please act accordingly. This virus is real, it's taken the lives of 2,000 Albertans, of millions of people around the world, and we are right now in the midst of what is likely the biggest wave of infection that we've experienced to date.”

Simons says far-right people attending anti-mask and anti-lockdown protests is not new in Alberta or the rest of Canada.

Two months ago, hundreds of anti-mask and lockdown protesters marched the streets of Edmonton and chanted “no more fake news” and “no more fake science”, Simons said.

Some even carried tiki torches, which many say is a symbol used by white supremacists.

Simons says the amount of misinformation being spread about COVID-19, and what is believed by so many people, is something she has never seen before.

“It's something that is really unprecedented. We have not dealt with something of this magnitude before.”

This report by The Canadian Press was first published April 11, 2021.