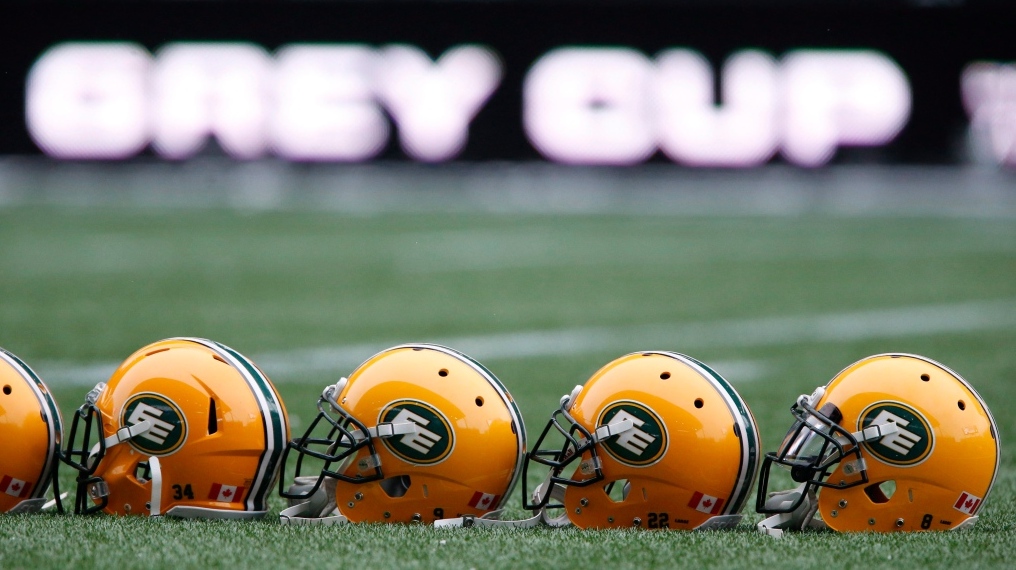 The Edmonton Eskimos have laid off a number of staff amid the COVID-19 pandemic. (THE CANADIAN PRESS/John Woods)

On Monday, the National Football League's Washington Redskins announced they would retire their name and logo after pressure from sponsors.

The last thing management wants is for people to be talking about the name of the team, said Marvin Ryder, an associate professor of marketing at McMaster University's DeGroote School of Business.

“Anybody talking about the name of your team, rather than the performance of your team or the athletes on your team, that's the wrong message. You want that to go away.”

When fans, players and sponsors start to say they feel uncomfortable with a name, a team starts to pay attention, he said.

Some sponsors of the Edmonton Eskimos also seemed uncomfortable with the CFL team's name.

Insurance provider Belairdirect said last week it is rethinking its premier partnership with the team. A spokeswoman said the company “will need to see concrete action in the near future, including a commitment to a name change.”

There are multiple reasons the issue is gaining public attention, said Ryder, noting many sports have been on a long hiatus due to the COVID-19 pandemic.

“Fans have been desperate to talk about something,” he said.

The Black Lives Matter movement has also generated momentum in the United States, he said, and prompted discussion on why teams hold on to racist or stereotypical names and mascots.

“It's made people reflect and reconsider,” he said.

“The tide has certainly turned of late,” said Brian Levine, founder and president of Envison Sports & Entertainment, a Toronto-based company.

But, the decision to change a name can be long. The Edmonton team recently wrapped a three-year long review that resulted in a February announcement of its intention to keep the name after finding “no consensus.”

Under mounting pressure, the team promised to speed up a second review and provide an update at the end of July.

It's a good sign that the CFL team started to examine its name years ago, said Levine.

“That means there's genuine care and interest as opposed to just reflecting what's happening and pressures, external pressures that could be new.”

The Edmonton name falls under a more nuanced area than that of Washington, he noted, meaning it may take more time to arrive at a decision as opinions in the community may vary. It's important they speak to a wide range of voices in making their decision, he said, noting the most important stakeholder, in this case, is the community that's affected by the name.

Both Levine and Ryder believe Edmonton will announce a name change as a result of the latest review. Cosentino said it's hard to speculate on the matter.

Teams switch up their logos every five or so years to keep it fresh, but also to generate revenue, said Ryder. It can bring in millions of dollars as fans flock to purchase the latest iteration of a team's jersey.

Typically, teams work closely with the sports league to change colours or logos on uniforms as the process can take 18 months to two years with uniforms being produced six to eight months ahead of a new season, said Cosentino.

But changing a name that's been deemed offensive is a more sensitive matter than just sprucing up a logo, he said.

It's unlikely any board room is considering these name changes as a way to sell more jerseys, said Levine, adding the logistical challenges may outweigh the pros in the short-term.

The process to decide on a new name and logo could take several months.

It includes qualitative and quantitative research, including focus groups or a contest, said Cosentino, as well as graphic representation, including colour selection.

The team will have to work with all licensees that produce goods with the team name and logo, he said, noting they'll have to account for what materials licensees have access to when choosing a new colour scheme for the logo.

The team will also have to change signage and other materials used in the stadium.

“It's an investment either way you look at it,” he said. “And it might not pay off in year one, but it will pay off dividends down the road.”
Due to the lengthy process, it's likely Edmonton would announce the intention to change their name soon, but hold off on releasing a new name and rather say it will be in place by the start of the 2021 season, said Lindsay Rennie, also with DEC Sports & Entertainment.
“I don't think they would be given the grace to have it stretched further than that.”
This report by The Canadian Press was first published July 13, 2020.