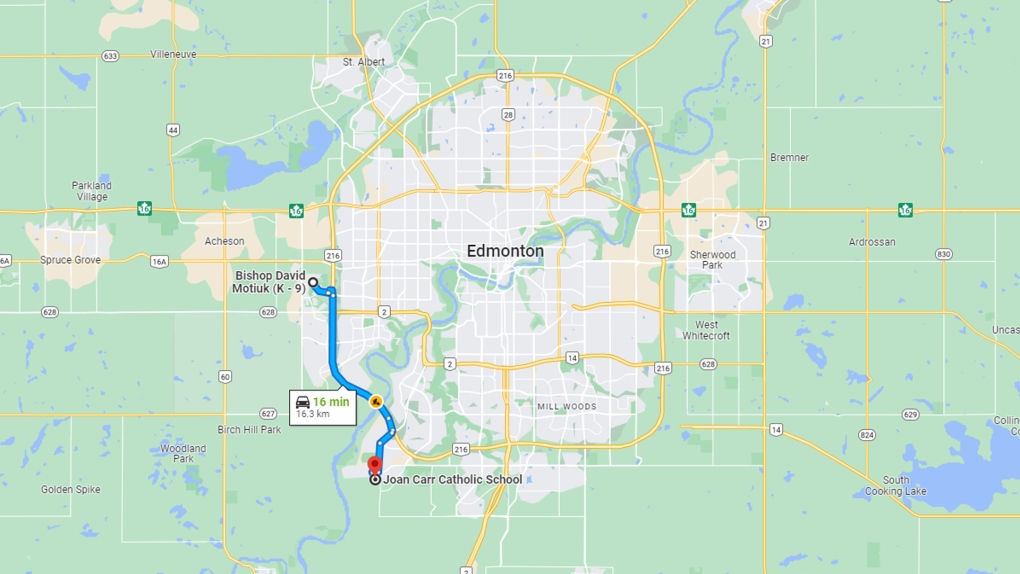 A new K-9 Catholic school was approved for the Lewis Farms neighbourhood in the spring, and the board anticipates it will open in September 2026, at which point the west Edmonton students will be moved to the new school.

The letter goes on to say when Bishop David Motiuk opened in 2017, it had an enrollment of 695 students.

Currently, 18 modular trailers, including two outside the school’s property, have been installed to bring the school’s capacity to 920 students.

As of Sept. 29, 2022 there were 1,381 students enrolled in the school, and the board is projecting that will jump to approximately 1,700 in the next three years.

Transportation costs for impacted students will be waived until the new school is completed.

The board says siblings of impacted students may also choose to attend Joan Carr School, but families will have to pay transportation costs.

“SAD THAT THIS WAS THE OPTION”

Next year her youngest will be redesignated to Joan Carr School, while her oldest will have the choice to remain at Bishop David Motiuk.

“She’s going to be split up away from her older sister, and have to go to a new different school,” she said.

The family has been part of the school community since 2017.

“I’ve been part of the parent committee since just before the school opened, we have ties with the school, we love the school.”

In addition to splitting up her two girls, Tsenekos has concerns about the distance to the new school.

She says a school bus driver shortage makes it difficult for her children to get to their existing school in a timely manner.

She also worries about putting her child on a bus on Anthony Henday Drive every day.

“It’s still a long ways to go. Edmonton weather is, it can be great one day, and really, really cold the next day, so I think there is a safety concern.”

She’s frustrated that it’s taken so long to get new schools approved for the growing neighbourhoods in west Edmonton.

“Statistically, you can see that these new neighbourhoods have a lot of young families included in their population, so the province, and the city, which was issuing permits, I think have to coordinate and plan a whole lot better.”

The province tells CTV News school boards are responsible for determining school attendance areas as well as redirecting students to other schools because of capacity issues.

“There is no solution that is going to be perfect as we await the opening of the K-9 Catholic school in Lewis Farms. We know that this decision is concerning to some families, but we believe this is the best solution with the least disruptions to learning.”

A gay man issues a court challenge over Canada's policy restricting sperm bank donations, a Quebec woman is surprised to find her stolen car had been used in brazen Ontario robbery, and actor Ryan Reynolds drops by a Toronto college and surprises students. Here's what you need to know to start your day.