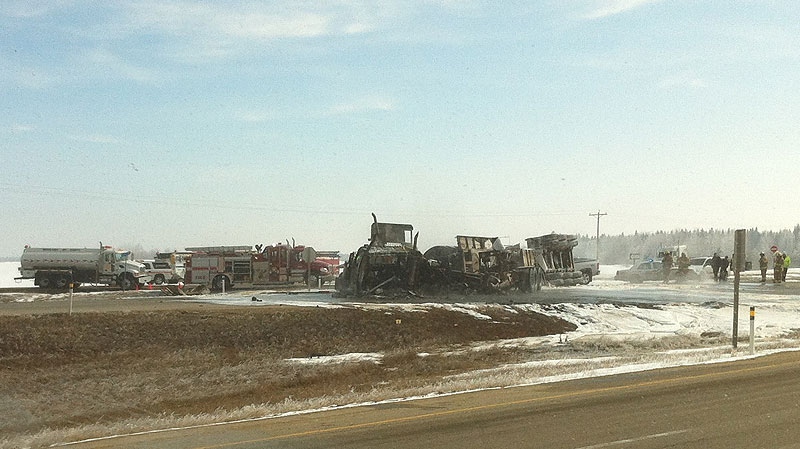 Emergency crews respond to a crash involving to semi-trucks and a pickup on Hwy 43 near Twp 584 on Sunday, March 25. Courtesy: J. Allen.

RCMP have closed northbound lanes of a major highway in northern Alberta after a serious three vehicle crash Sunday morning.

Police said the crash occurred at about 9:20 am, on Highway 43 and Township Road 584, just north of Mayerthorpe.

A semi-truck was turning left across northbound lanes on the highway, when it was struck by another semi travelling north on the same highway.

It's believed a pickup also travelling north along the highway was unable to stop in time, and ended up hitting the back of the other northbound vehicle.

Police said the two people in the pickup were taken away from the scene by ground ambulance, and then flown by STARS to hospital in Edmonton, one had non-life threatening injuries, and the other was in serious, but stable condition.

The driver of one of the semi-trucks was taken to hospital with non-life threatening injuries, however the driver of the other semi was pronounced dead at the scene.

Police are investigating, however alcohol and drugs are not believed to have been factors in the collision – investigators said initial results show weather conditions may have contributed to the crash.

The highway is expected to open once it's cleared of debris from the crash.