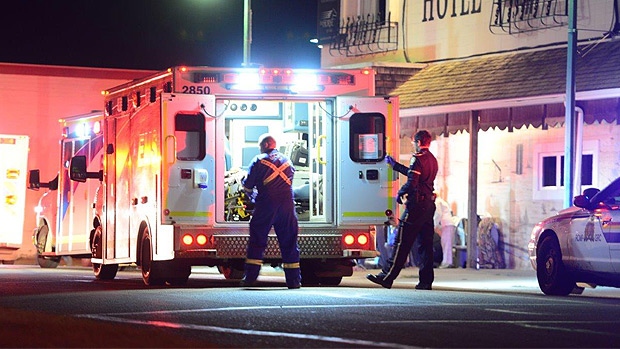 RCMP and emergency crews attend the scene of a fatal stabbing in Sexsmith, Alberta on Sunday, October 25. (Credit: William Vavrek)

RCMP continue to search for a suspect after a fatal stabbing near Grande Prairie early Sunday morning.

Police said at about 1 a.m., officers responded to the scene of a multiple stabbing at the Alamo bar in the town of Sexsmith, located about 20 kilometres north of Grande Prairie.

According to officials one of four adults transported to hospital has died from their injuries. No word yet on the condition of the remaining victims.

RCMP assure local residents this incident is not believed to be a random act and poses no public safety concern.

STARS air ambulance responded to the scene - no other details have been released.