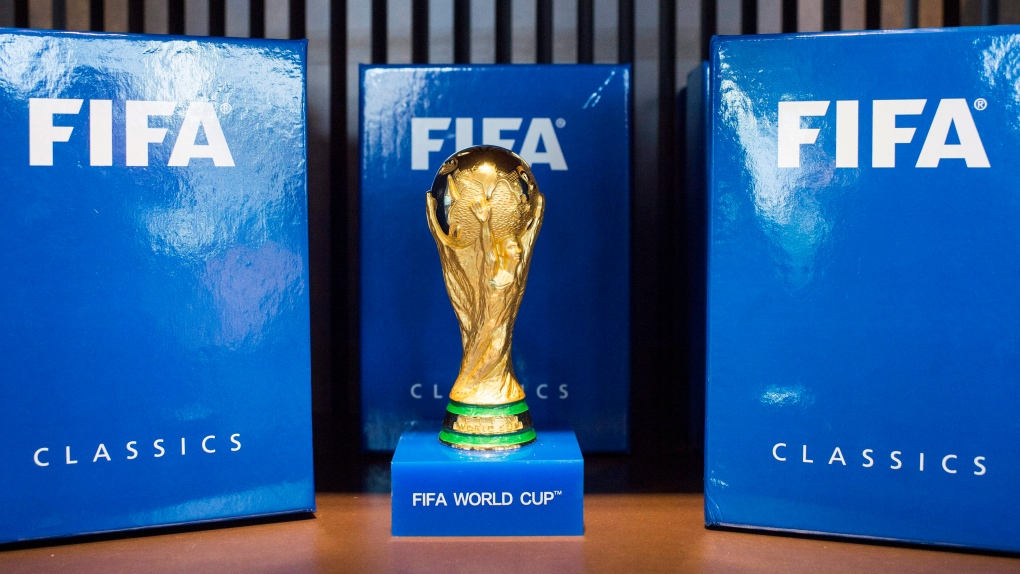 A World Cup soccer trophy is on display during the exclusive preview of the FIFA World Football Museum in Zurich, Switzerland on Wednesday, Feb. 24, 2016. (Ennio Leanza / Keystone)

TORONTO -- The next step in the host city selection process for the 2026 World Cup takes place Thursday when FIFA representatives meet with the Canadian Soccer Association and representatives from Edmonton, Toronto and Montreal.

The travelling FIFA group, which numbers more than 10, is holding similar workshops in Mexico City and Dallas around the Toronto visit.

The three candidate Canadian venues will be represented by city, tourism and stadium officials. The workshops will cover everything related to the competition, from accommodations and training sites to transportation.

“It's the opportunity for FIFA to engage directly with the candidate host cities on the requirements,” said Peter Montopoli, general secretary of the Canadian Soccer Association. “There are other stages of the process ... (Thursday) is really the first engagement between FIFA and the candidates host cities.”

The workshops will be followed by venue visits in the three countries later this year. FIFA will then evaluate the cities and make a recommendation likely in the first quarter of 2021.

“Our goal is take our three Canadian host cities and move them over to the official side,” Montopoli said. “That's our job here.”

FIFA has said it will make the ultimate decision on “up to 16” candidate cities from the list of 23 submitted by the North American joint bid. In addition to the three in Canada, there are three candidate cities in Mexico and 17 in the U.S.

The current bid blueprint calls for Canada and Mexico to host 10 games each with the U.S. hosting 60, including all games from the quarterfinals on. The bid group has been working under the premise of three cities in each of Canada and Mexico and 10 in the U.S.

Bid officials have already talked of having three games back-to-back-to-back on the opening day of the tournament, using BMO Field, Mexico City's Azteca Stadium and the Rose Bowl in Pasadena, Calif.

The Mexico cities are Guadalajara, Mexico City and Monterrey.

According to the United Bid committee, the stadiums involved have an average capacity of more than 68,000.

The committee lists capacity for the Canadian host city venues as 56,418 for Commonwealth Stadium, 55,822 for Olympic Stadium and 45,500 for BMO Field, which would require temporary seating to reach that number.

The average seating capacity of all the stadiums under consideration is 69,261.

The 2026 tournament is being expanded to 48 teams from 32, which means more fans on the move. The bid group anticipate 5.8 million tickets sold and full stadiums for every match. The games in Canada - if the goal of 10 is met - would probably draw at least 500,000 spectators.

One complication to the joint bid is that it crosses borders.

FIFA's member associations voted 134 to 65, with one no-vote, in June 2018 in favour of the joint North American bid by Canada, the U.S. and Mexico over Morocco.

Canada failed in its lone previous bid to host the World Cup in 1986 after Colombia pulled out as host. Mexico eventually hosted the tournament, which remains the only World Cup the Canadian men have ever qualified for.

But it has good relations with the world governing body these days, having staged an array of successful FIFA tournaments including the 2015 Women's World Cup. CONCACAF president and FIFA vice-president Victor Montagliani, a former Canada Soccer boss, is also an ally.

This report by The Canadian Press was first published March 9, 2020.