EDMONTON -- An Edmonton brewery has launched a new beer to help raise money for Amyotrophic Lateral Sclerosis (ALS) and honour an advocate for the disease in the process.

Sea Change Brewing Co. started selling Adam’s Pale Ale on Thursday, pledging to donate a dollar from ever four-pack sold to the ALS Society of Alberta.

Adam Rombough was diagnosed with ALS in 2017 and spent the last months of his life fundraising money and promoting awareness for the disease. He died in May of 2018 at the age of 34.

“Adam was just a huge beer fan," he told CTV News Edmonton. "That’s kind of how it sparked it. It was sort of a long shot just thinking what can we do together, and June was coming up fast so we thought we’d make a beer and push it as hard as we can, and it’s been a major success.”

The beer, featuring Adam’s smiling face on the can, is already selling quickly and not expected to last long. It is currently sold out at the Edmonton Sea Change Brewing Co. taproom but is still available at various liquor stores across Alberta. 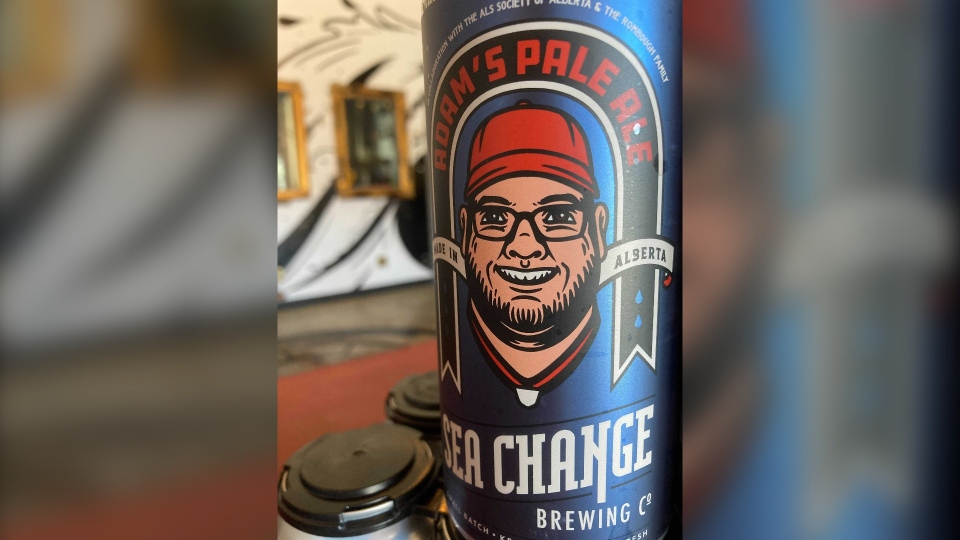 “I’m imagining in the next little bit here, it’s going to be gone,” Nguyen said.

The brewery is also selling jersey style beer koozies and t-shirts with all of the money raised going the ALS Society of Alberta.

Rains Maida, the lead singer of Our Lady Peace, Adam’s favourite band and the first concert he attended, tweeted his support for the initiative.

Prime Minister Justin Trudeau also sent a message of support, thanking the organizers and saying that Adam’s “fight with the disease and kindness towards others serves as an inspiration to our nation.”

And Mayor Don Iveson is "enjoying a cold one" Friday afternoon to support ALS Society of Alberta.

Enjoying a cold one to support @ALS_AB! This local initiative in partnership with @SeaChangeBeer will help to raise funds & awareness for #ALS. #OneOnAdam #EndALS #yeg #Edmonton pic.twitter.com/fYZMl0vnxc

Nguyen explained what the support meant to the staff and organizers.

“It’s an amazing feeling, just our team here alone, it kind of brought us together under a common goal other than just making and selling beer. So at the end of the day, we’re just a brewery but we’re using it as a way to try and make a difference at a local level.”

People can make a donation to the cause at www.alsab.ca/seachange, where they can also find a list of liquor stores stocking the beer.