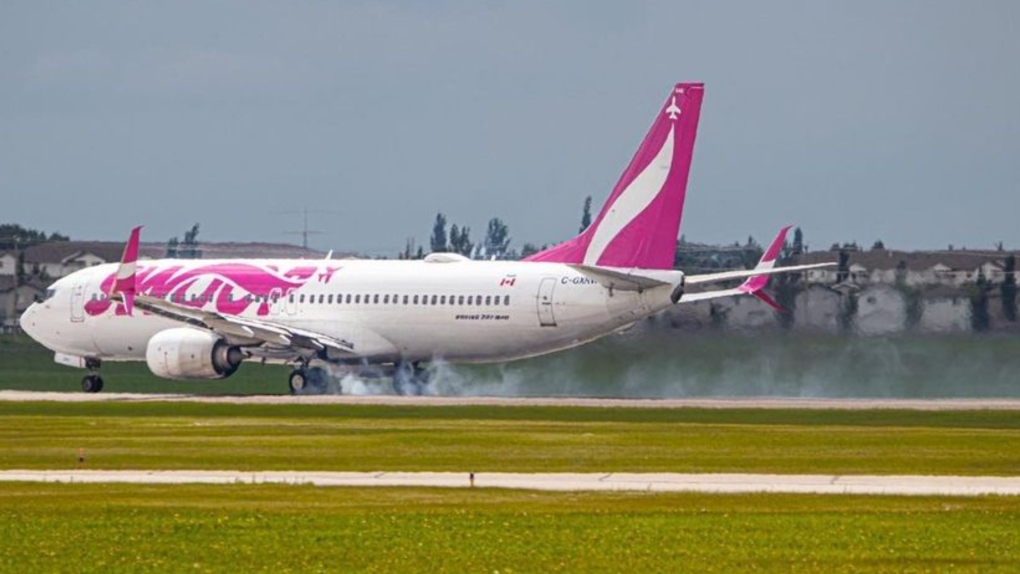 A Swoop plane landed back in Edmonton after it sustained damage during takeoff on Monday, July 4, 2022. (Credit: jd.aviation/Facebook)

An Edmonton flight bound for Halifax never made it to its destination after landing gear sustained damage during takeoff Monday afternoon.

Swoop Flight WO 264, with 189 travellers and six crew members, was to depart Edmonton at 12:55 p.m. and arrive in Halifax approximately five hours later.

During takeoff, a tire on one of the landing gear of the Boeing 737-800 twin-jet was damaged, Swoop told CTV News.

"Out of an abundance of caution, our pilots diverted the flight back to Edmonton and held in-flight for approximately two hours to burn off excess fuel required for landing within appropriate weight thresholds," said Kelsey Trainor, Swoop spokesperson.

The aircraft landed safely and was able to return to the gate without incident, Trainor added. It has now been removed from service for maintenance and inspection.

Flight WO 264 and the return trip of the same aircraft to Edmonton later Monday night, WO 265, were cancelled the airline said, with travellers rebooked on "the next available" Swoop or WestJet flight.

"The safety of our travellers and crew is our top priority," Trainor said. "We sincerely apologize to our travellers for the delay and inconvenience to their travel plans."

A year after the Taliban seized control of Kabul, Canada's resettlement efforts have lagged behind official targets and the efforts to help those fleeing the war in Ukraine. More than 17,300 Afghans have arrived in Canada since last August compared to 71,800 Ukrainians who have come to Canada in 2022 alone.

Anne Heche, the Emmy-winning film and television actor whose dramatic Hollywood rise in the 1990s and accomplished career contrasted with personal chapters of turmoil, died of injuries from a fiery car crash. She was 53.

The Taliban on Monday marked a year since they seized the Afghan capital of Kabul, a rapid takeover that triggered a hasty escape of the nation's Western-backed leaders, sent the economy into a tailspin and fundamentally transformed the country.

An Iranian government official denied on Monday that Tehran was involved in the assault on author Salman Rushdie, though he justified the stabbing in remarks that represented the Islamic Republic's first public comments on the attack.

Why has polio been found in London, New York and Jerusalem, and how dangerous is it?

Polio, a deadly disease that used to paralyze tens of thousands of children every year, is spreading in London, New York and Jerusalem for the first time in decades, spurring catch-up vaccination campaigns.