A former Alberta premier and MLA have organized a donation drive to fill a plane with 35 tonnes of aid to Ukraine.

Thomas Lukaszuk, former Edmonton-Castle Downs MLA and deputy premier, and former Premier Ed Stelmach decided to use their "Rolodex of friends and colleagues" to create the campaign within a week.

"Watching the news and seeing the atrocities that are being inflicted on Ukrainian people by Russia made me realize that there must be something that we can possibly do from here," Lukaszuk told CTV News Edmonton.

"Next thing we knew, we were getting tons and tons of vital equipment," Lukaszuk said.

The next step was finding a way to get all the donated items to Ukraine.

"I made a cold call to the CEO and president of Polish Airlines LOT," Lukaszuk said. "I said, 'I need an airplane' — fully expecting a laugh on the other side of the phone.

"The president said, what kind of an airplane would you like," he added. "When I described to him what it is that we have and how much of it, he said, you obviously need our biggest airplane which is the Boeing 787 Dreamliner."

The Polish airline agreed to donate the plane and enough fuel to cover one round of the trip from Warsaw to Edmonton.

"So again, Premier Stelmach and I got back on the phone and called Shell Canada," he said, adding that the company agreed to donate 50 tonnes to fully re-fuel the 787.

Now individual Albertans are helping to fill the rest of the plane with other needed items, Lukaszuk said, including thermal blankets, pain medications, adult and youth diapers, feminine hygiene products, and sleeping bags. Items can be dropped off on Monday and Wednesday at the Polish Hall in Edmonton from 2 to 7 p.m.

Lukaszuk said donations are also coming in from British Columbia, Ontario, and Saskatchewan.

"I expected this kind of response from Canadians," he said. "Everyone has a neighbour that is Ukrainian." 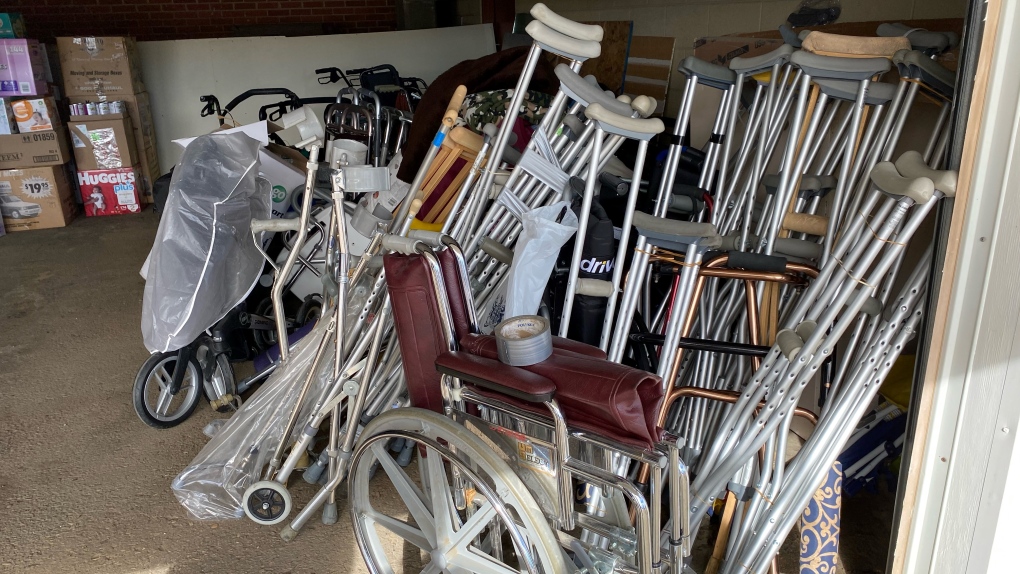 Some of the supplies gathered so far at the Polish Hall in Edmonton on Monday, March 21, 2022 (CTV News Edmonton/Alison MacKinnon). 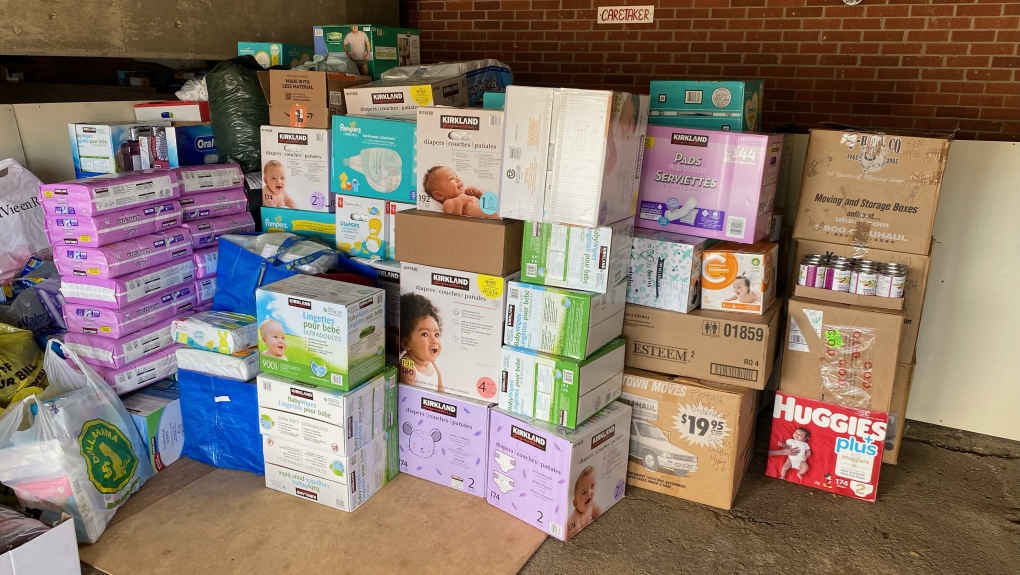 Some of the supplies gathered so far at the Polish Hall in Edmonton on Monday, March 21, 2022 (CTV News Edmonton/Alison MacKinnon).

Lukaszuk and Stelmach, with the help of the Ukrainian Canadian Congress (UCC) and the Polish Canadian Historical Society, are also trying to bring Ukrainian refugees on the empty return flight.

"So we are working right now with our (federal) minister of immigration to see if we can find refugees that are ready, fully documented, and willing to come to Edmonton," he added. "Because we have an airplane to our disposal."

"We are hoping to populate that plane and have a bum in every seat."

Lukaszuk said the UCC has host families in Alberta who are ready to welcome refugees.

Many local businesses in the Edmonton area decided to donate supplies to help fill the plane, including Therapyware.

"As a business owner that supplies things for children with autism and special needs, I feel for the children in Ukraine who are going through a lot of trauma," said Peggy Duncan, owner of Therapyware. "Some of these things will hopefully give them a little bit of distraction."

She gathered $4,000 worth of merchandise to donate and is now asking her suppliers to match her contribution. 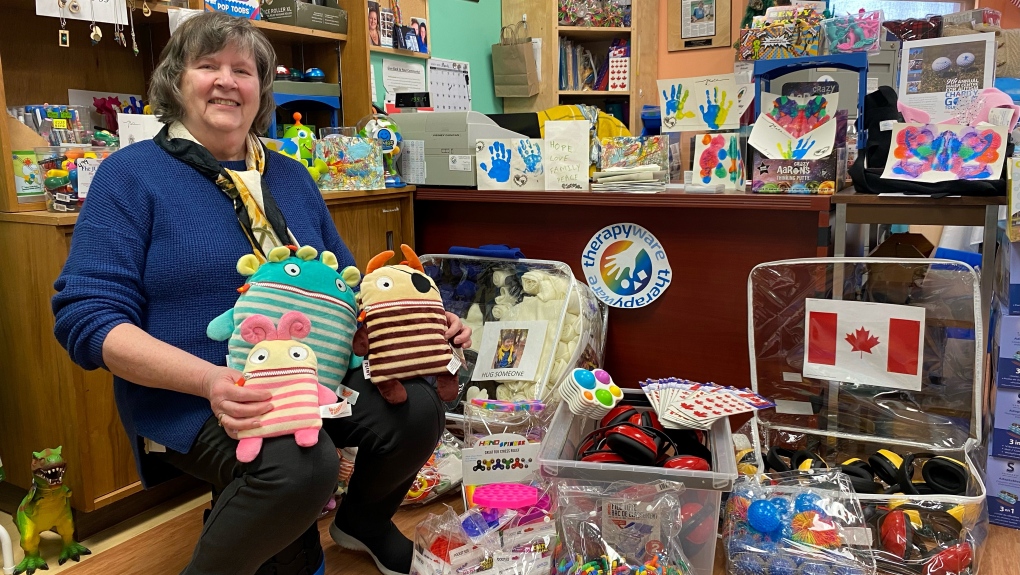 Peggy Duncan, owner of Therapyware, sits with some of the toys she is donating as part of the fill-a-plane campaign (CTV News Edmonton/Alison MacKinnon).

"It's just a small thing that I can do to help some of the kids," Duncan said. "It's a small contribution. It's the only thing I can do."

The plane is scheduled to arrive in Edmonton on March 28.

Patrick Brown has been disqualified from the federal Conservative leadership race, after ballots have already begun to be mailed out, and his campaign is fighting back against what it calls anonymous allegations.

Woman who was set on fire on Toronto bus has died, police confirm

Parents of boy, 2, among dead at Fourth of July parade shooting

Aiden McCarthy's photo was shared across Chicago-area social media groups in the hours after the July 4 parade shooting in Highland Park, accompanied by pleas to help identify the 2-year-old who had been found at the scene bloodied and alone and to reunite him with his family. On Tuesday, friends and authorities confirmed that the boy's parents, Kevin McCarthy, 37, and Irina McCarthy, 35, were among seven people killed in the tragedy.

Australian authorities have charged 12 members of a religious group with the alleged murder of an 8-year-old girl, police said in a statement Tuesday.

Jayland Walker was handcuffed when his body arrived at the medical examiner's office: autopsy report

Jayland Walker was handcuffed behind his back when his body arrived at the coroner's office to be processed as part of the investigation into the officers who shot and killed him in Akron last week, according to a medical examiner's report that was reviewed by CNN.

Boris Johnson vows to stay on despite top tier resignations

British Prime Minister Boris Johnson says he plans to stay in power despite the resignations of two top Cabinet ministers and a slew of more junior officials.

A high school friend of B.C. teen Amanda Todd has testified he took action when he saw what he described as a “pornographic” picture of her on Facebook in November 2011.