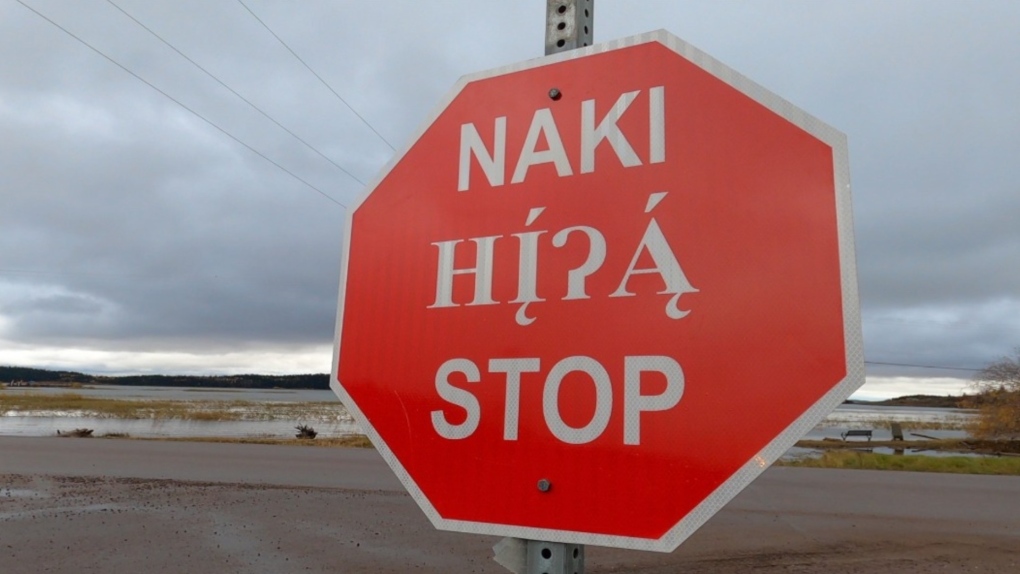 New stop signs in Fort Chipewyan are part of an effort to promote the Indigenous languages of the Wood Buffalo region. (Source: Rural Municipality of Wood Buffalo)

FORT MCMURRAY, ALTA. -- All of Fort Chipewyan's stop signs are now in Cree, Dénesųłiné and English. Mayor Don Scott says similar traffic signs will be put up across the region next year, including in Fort McMurray.

“This has always been a diverse region, and our rich culture and heritage make it truly a special place to call home,” he said.

This is the first municipal initiative promoting Indigenous languages, although they are not the first Cree and Dénesųłiné signs in Fort Chipewyan. The community has welcome and grocery signs in the three major languages at the K'ai Taile Market and outside the Athabasca Delta Community School.

“Our languages are slowly disappearing because of the effects of residential schools,” said Teri Villebrun, councillor for Athabasca Chipewyan First Nation (ACFN), in an interview. Fort Chipewyan was the site of the Holy Angels Residential School, which closed 1974. Between 1880 and 1953, 89 students died at the school. “These signs recognize the needs of promoting our Indigenous languages.”

Villebrun said people are excited about the new signs in a community that has centuries of history to share. Founded in 1788, Fort Chipewyan is Alberta's first European settlement. It was established as a trading post and named after the Chipewyan people already living in the area.

“We do really have a sense of pride in our community,” she said. “It's our traditional land of the Dene, Cree and Metis and we are so proud of our culture.”

According to the United Nations Educational, Scientific, and Cultural Organization (UNESCO), three-quarters of Indigenous languages in Canada are “definitely,” “severely” or “critically” endangered.

The most recent data on languages spoken in Canada comes from the 2016 census, which found only 20 per cent of First Nations people could converse in an Indigenous language. This is a six per cent drop from 2006.

The municipality has posted to its website its own efforts and resources on meeting the Truth and Reconciliation Calls to Action.

An October 2019 report commissioned by the municipality also surveyed the attitudes First Nation and Metis leaders had towards their place in the region. At the time, the report found the administration of the day was “proactive” in incorporating the calls to action into its organizational structure, but was lagging on delivering, or lobbying for, basic services in rural communities.