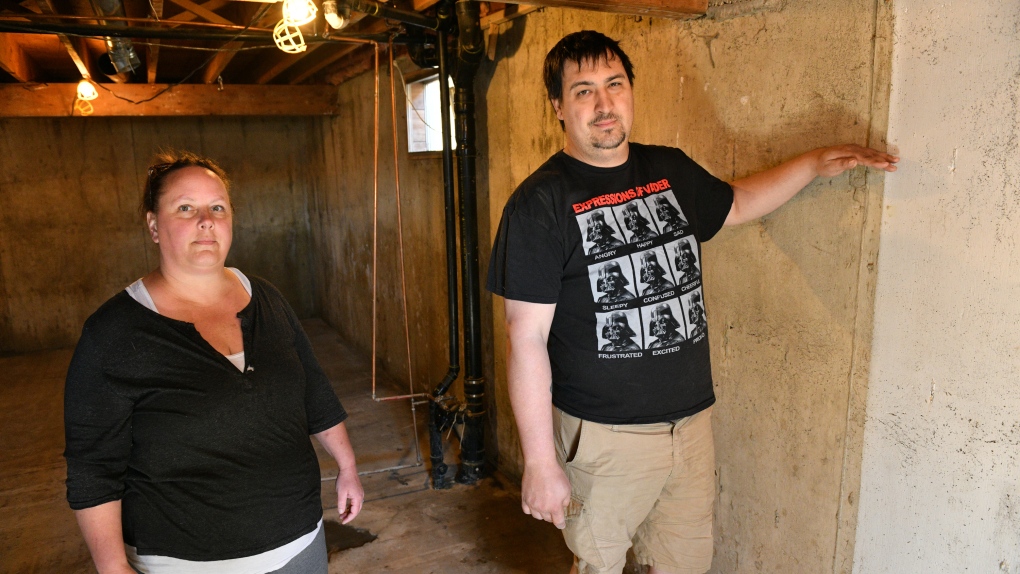 Homeowners Cora and Alec Dion pose in the basement of their home in Fort McMurray, Alta., on May 8, 2020. The Dions had about five feet of water in their basement as a result of recent flooding in downtown Fort McMurray. This marked the second time the couple faced evacuation from their home since the Horse River wild fire of May 3, 2016. THE CANADIAN PRESS/Greg Halinda

EDMONTON -- More than seven months ago, Cora Dion and her husband fled Fort McMurray for the second time in four years as a spring flood threatened their home in northern Alberta.

They returned to a soggy mess in the basement, a dispute with their insurance company and the near-foreclosure of their home in the city's downtown.

“We're home,” Dion said in an interview earlier this week. “Our basement is still naked, but we have hot water and we have a furnace.”

Dion is one of 13,000 residents who were forced to flee the city in late April when ice jams led to major flooding by causing the Athabasca and Clearwater rivers to overflow their banks.

The flooding came exactly four years after a destructive wildfire caused the evacuation of the entire city.

John Pomeroy, a Canada Research Chair in Water Resources and Climate Change at the University of Saskatchewan, said floods caused by river ice breaking up can be some of the most damaging.

“It's worse than just having water, because it's ice mixed in with the water. The chunks of ice - some of them the size of houses - they do a lot of damage,” he said.

The disaster damaged at least 1,200 structures and caused $522 million in insurable damage to businesses, homes and vehicles, show the latest numbers from the Insurance Bureau of Canada.

Another $147 million in provincial disaster relief went to other communities affected.

No one from the Regional Municipality of Wood Buffalo was available for an interview, but an October news release said crews had installed temporary clay berms downtown and in other communities that were hit.

“We're doing everything in our power to protect residents and businesses against overland flooding,” deputy chief administrative officer Matthew Hough said in the update.

He said the municipality is working toward more permanent solutions.

Pomeroy said berms are a start, but suggested officials should also consider making room for the river because climate change makes the size of future floods uncertain.

“That means starting to migrate the community's infrastructure resources away from the floodplain and get homes out of danger, out of harm's way,” he said.

At least one Fort McMurray resident said she and her husband are considering a move to a safer location.

“We have four months until it's flood season again, but I expect we will probably be looking for another place - something out of the fire zone and out of the flood zone,” said Therese Greenwood.

The Greenwoods lost their home in the fire and rebuilt it, but ended up selling the new house and renting a two-bedroom townhouse near the Clearwater River. They lost many of their belongings in the basement during the flood.

Greenwood said they have been able to live on the top floors of the condo for the last few months and were able to start using the basement again on Oct. 31.

“The neighbourhood that we are in was a complete construction zone from May until October 31st.”

She said it was difficult for people to get supplies because many stores in the downtown had been flooded. Some small businesses have never reopened, she added.

“It was a little bit like the fire again.”

The Dions, whose insurance policy didn't cover any damage, have also been able to move back into their home, but they still have a lot of work to do in their basement.

“We have received our disaster relief funding,” Dion said, but noted the money didn't come until November. “That took quite a long while, so really we aren't going to be doing much work until spring.”

But she said they don't plan to sell their home.

“It's not a good time for that,” she said. “The housing market is horrible, people aren't buying so that's not really in our best interest.”

Dion said it's all been a learning experience.

“My house didn't burn down in the fire, but the fire was way scarier for me in terms of the trauma,” she said. “If I watch the videos (from the flood), I can get pretty upset ... about the devastation in my basement, but it's just stuff.”

She said they continue to recover from both.

This report by The Canadian Press was first published Dec. 5, 2020.