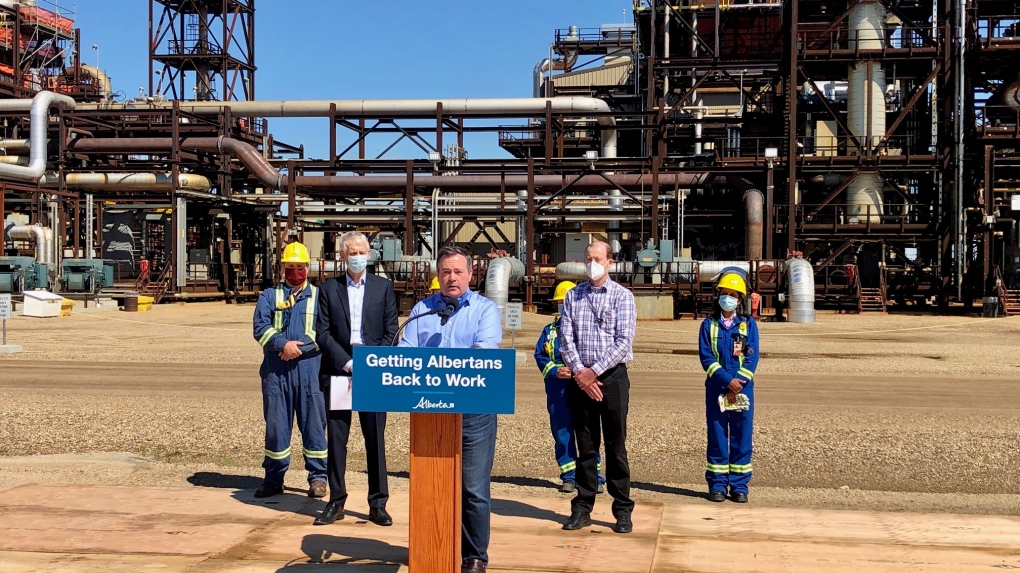 EDMONTON -- The Quest carbon capture and storage facility at the Shell Scotford Complex in Fort Saskatchewan has reduced emission production by the equivalent of 1.25 million vehicles, the Alberta government says.

The Alberta government held an event at the site Friday to recognize the five megatonnes of carbon the facility has captured since being built in 2015.

“I was skeptic about (carbon capture and storage) a decade ago because of cost,” Kenney commented.

“I know there have been doubters at home and abroad, but CCS has now been established as a primary technology for reducing industrial emissions and it’s only going to get bigger, and more cost effective.”

On Friday, officials said the facility could be built at about two-thirds of its original cost.

Michael Crothers, president and country chair of Shell Canada, called the Friday milestone an important achivement not just for the company in its journey to reaching zero-net-carbon by 2050, but also Alberta and the country.

“With Quest we’ve shown the world that Canadians have the wherewithal, the technology, the ingenuity, to lower carbon emissions and also that CSS technology is viable and it works,” he said.

In May 2019, the Quest carbon capture project marked four million tonnes of stored carbon dioxide, equivalent to the annual emissions of about one million cars.

Kenney called Quest an example of his government’s plan to regrow the provincial economy, which centres on job creation through infrastructure projects.

“When the global economy comes back form COVID, when demand returns for oil and gas, we are going to see, I believe, something of a supply shortage because of all the upstream exploration that has been cancelled, and so we’ll see prices go up, and that will be a great opportunity for Alberta, especially as we make progress on pipelines,” Kenney told media.

“But there’s one critical factor, we’ve got to bring investment back. And that means we’ve got to demonstrate our progress on environmental responsibility which is why investments like this… are so important to jobs , the economy, and the future prosperity of Alberta.”

The Quest project was sold to Calgary-based Canadian Natural Resources Ltd. in 2017, along with most of Shell's Alberta oilsands assets, but is still operated by Shell.

The facility captures and stores underground about one-third of the CO2 emissions from the Shell-operated Scotford Upgrader, which turns oilsands bitumen into synthetic crude that can be refined into fuel and other products.

The Scotford site opened in 1984 and has twice been expanded: once in 2011, and again in 2015 when the Quest carbon capture and storage facility was built.